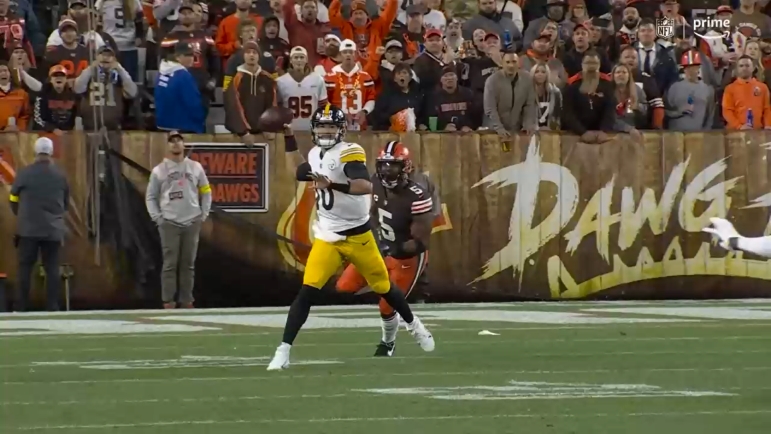 Even with his best performance of the season, to date, coming on Thursday Night Football on the road against the Cleveland Browns, Pittsburgh Steelers quarterback Mitch Trubisky remains ranked in the bottom half of the latest NFL.com QB Index from NFL Network’s Marc Sessler.

That seems pretty telling, quite honestly.

IN his best performance to date, it still wasn’t good enough from Trubisky for the Steelers to win. Granted, there were some significant plays that weren’t made, but Trubisky wasn’t able to elevate his game in the second half to help the Steelers sustain drives and put points on the board, resulting in a frustrating 29-17 loss to the AFC North rival Browns, increasing calls for rookie first round pick Kenny Pickett.

On the year, Trubisky has a 60.2 completion percentage, has thrown for 569 yards, two touchdowns, one interception and is averaging 5.5 yards per attempt. Using his legs has been an issue for Trubisky as well, as he has just 23 rushing yards on the season, but did add a rushing touchdown last week on a read-option in the red zone.

Still, in his sixth year in the NFL, those numbers simply aren’t good enough, reflecting his ranking at No. 27 overall out of 32 quarterbacks in the QB Index from Sessler. Only New England’s Mac Jones, Carolina’s Baker Mayfield, the Jets’ Joe Flacco, Houston’s Davis Mills and Chicago’s Justin Fields are below him in the rankings.

“Pittsburgh’s taverns and late-night greasy spoons are packed with yinzers calling for Kenny Pickett to trot into Heinz Fie … Acrisure Stadium. Mike Tomlin’s response after last Thursday’s loss to the Browns: “Definitively no.” The Steelers aren’t a panic-prone organization, even if they see Trubisky’s obvious limitations,” Sessler writes regarding Trubisky’s ranking at No. 27 overall for the second straight week. “He makes plays outside the pocket, but continues to miss wide-open targets. Against the Browns, Pittsburgh converting just one of nine third-down tries contributed to the defense tiring out over 36-plus minutes on the field.”

When #Steelers players are talking about not executing, a handful of throws in here should be shown. https://t.co/m30sRjUcUI

Though the offensive struggles cannot be placed on Trubisky’s shoulders alone, his level of play hasn’t been good enough to elevate a poor scheme or overall execution like Ben Roethlisberger was able to late in games last season.

Second-year offensive coordinator Matt Canada is not scheming up route combinations for his talented receivers to consistently win, especially on the weighty downs, and Trubisky isn’t quite seeing the field cleanly. Both can be true. It’s not a one or the other thing here with the Steelers’ offense.

There is a myriad of issues with the Steelers’ offense right now. In fact, those issues have dated back to the 2021 season as well. That said, Trubisky was supposed to be an ideal fit for the scheme and allow the Steelers to open things up a bit. That hasn’t happened, and Trubisky hasn’t played well enough in the first three games of the season to earn a higher ranking.