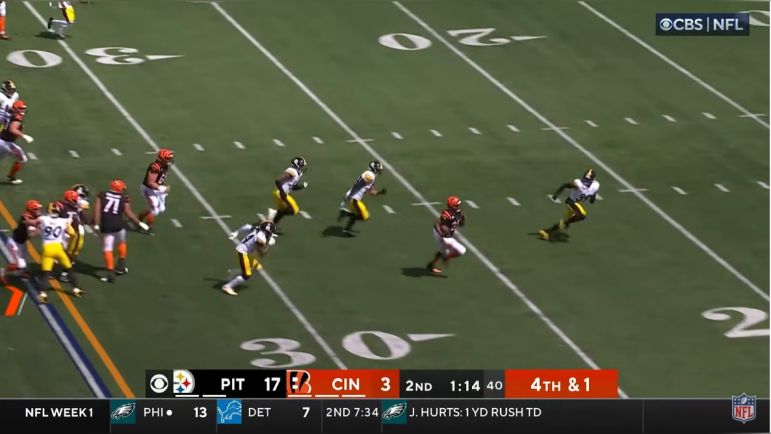 The Pittsburgh Steelers’ run defense took a strong step in the right direction in Sunday’s opener against the Cincinnati Bengals, holding Joe Mixon and company to under four yards per carry. But DC Teryl Austin isn’t satisfied at stopping there and he knows Pittsburgh could’ve done a better job. Austin spoke about it in his weekly meeting with reporters.

“I think we’re better, but we’ve got a long way to go,” he said via 93.7 The Fan’s Josh Rowntree. “We gotta do better. We gave up the one big run on that fourth down play and I got to get them in a better situation. We gotta execute better. It was a little bit of everything there.”

Austin is referring to Mixon’s 31-yard run on 4th and 1, forcing Minkah Fitzpatrick to make a touchdown-saving tackle. Take a look at the play.

Cam Heyward cited run fit issues on the play though identifying specific problems and people is tough to do. The Bengals did a nice job motioning the tight end inside on an insert block to create an extra gap for the defense to account for. Pittsburgh was short to that side, five defenders for six gaps, and were one-heavy on the weak side of the play, so perhaps that reflects Austin’s comment about needing to put the team in a better situation.

Still, even with that run included, the Bengals averaged under four yards per carry. Mixon himself registered at only 3.0 YPC. Joe Burrow’s QB scrambles influenced some of Cincinnati’s rushing numbers. Compared to how Pittsburgh did the last time they played the Bengals, a game in which Mixon rushed for a 165 yards, this was a big step forward. But Austin’s been around the block long enough to know one game is just one step. And a bad performance this Sunday against New England wipes out all potential progress made to start the year.

“We’ll found out at the end of the year how good we are.”

Pittsburgh is coming off a year in which they were a league-worst 32nd against the run, allowing five yards per carry. They’ll take on a Patriots’ team with two strong running backs in Damien Harris and Rhamondre Stevenson, two big and bruising runners. The Pats failed to establish their run game in their opener against the Dolphins, falling behind and trying to play catch-up, and odds are good they want to return to their run game roots this weekend.