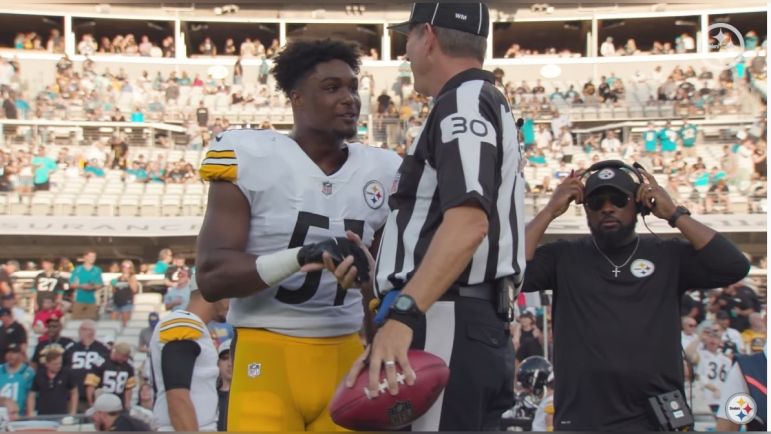 After being a second-round pick back in 2016 courtesy of Jacksonville, Myles Jack was a tackling machine, registering 100+ tackles in three of the last four seasons before becoming a cap casualty this past offseason. The still just 27-years of age middle linebacker inked a two-year deal with Pittsburgh a few months back, and he almost feels like he has a new lease on his football life.

“I almost feel like a young guy all over again because I’m learning a new way of doing things, a new way of executing under pressure,” Jack said earlier on The Standard Podcast via the Steelers Official YouTube page. “It’s been great for me just being a part of the organization and training camp up until now.”

The now has Jack currently in some impressive company, as after last week’s game against Cleveland, he’s the only other Steelers player to post 10+ tackles in three straight games since James Farrior, arguably the top free agent acquisition in team history, did it in 2008.

After going through a carousel of three coaches in six seasons, Jack is now fully embedded in perhaps the most stable franchise in all of sports, and on defense, he’s under the guidance of two of the most respected names in the game in Defensive Coordinator Teryl Austin and Linebackers Coach Brian Flores. He touched on how each has helped add wrinkles to his game to make him a better player, and draw inspiration to become more of a leader.

“I definitely see myself as a leader, just going out there trying to get things lined up, keeping the communication going, but I just try to lead by example, speak up when necessary and lead by play.”

Perhaps the most influential person on the team to impact Jack though is Head Coach Mike Tomlin, who Jack pointed out the nuances and ways he looks at the game is unlike anything he’s ever seen or experienced. And all things considered, this isn’t much of a shock at all, considering Jack was coached last season by Urban Meyer.

As we all know here at Steelers Depot, Tomlin is a man of many fluent words, and everything he says, he says it with a purpose, as Jack was quick to note. The thing that perhaps means the most to Jack about his new coach is the life lessons that he teaches, and ties into the many things he says, which when he talks, Jack says he commands the entire room. In fact, Jack writes down many of the things that come out of Tomlin’s mouth.