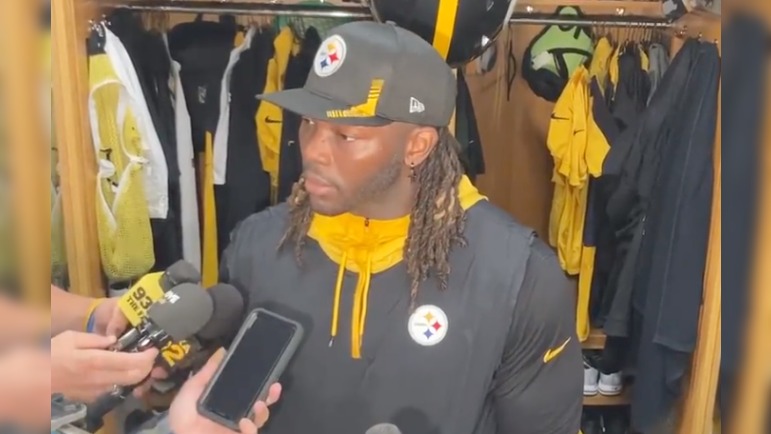 DL Larry Ogunjobi spoke to the media Monday following the team’s 17-14 loss to the New England Patriots, and spoke about the team’s run defense in the final moments, as they couldn’t get New England off the field and give the offense another chance to try and win the game.

When asked how important the details will be to learn from Pittsburgh’s mistakes Sunday against the Patriots as the team prepares to face off against his former team in Cleveland on a short week, Ogunjobi mentioned that the defense will have to locked in to prevent a dynamic Browns’ rushing attack from taking over in this game.

“It’s extremely important,” Larry Ogunjobi said to the media Monday in the locker room on video from Chris Adamski’s Twitter page. “You know, on Sunday we had a slip up, so we got to watch the film. I know personally that a lot of guys took the time to reflect and be ready for the next challenge.”

The Steelers held New England to 124 yards rushing on 31 attempts (4.0 YPC), doing well for most of the game in terms of preventing the Patriots from ripping off big runs. However, they couldn’t get off the field in the fourth quarter as New England successfully ran out the clock with over six minutes left in the game, picking up multiple first downs on the ground as Pittsburgh’s hopes at a comeback vanished as time went on.

While it may not have been fair for the defense to shoulder the load as the offense couldn’t establish anything in their final two possessions of the game, they understand that the weight is on them to come up big when the team needs it most as the identity of the team until the offense can hold its own in games. They rose to the occasion for the most part in last week’s win against the Bengals, forcing five turnovers and taking one back for a defensive score. However, they weren’t able to make the same impact this time around and paid for it, as the team fell at home to New England.

Ogunjobi is right in saying that it’s important for the defense to reflect on what transpired Sunday, but be able to quickly move on and watch the tape with a Cleveland Browns squad up next that is coming off its own emotional defeat by the hands of the New York Jets in the final moments. Given the team’s identity on offense literally runs through RBs Nick Chubb and Kareem Hunt, Ogunjobi and the defense will have to show they can rebound quickly and keep Cleveland from gashing them on the ground Thursday night.