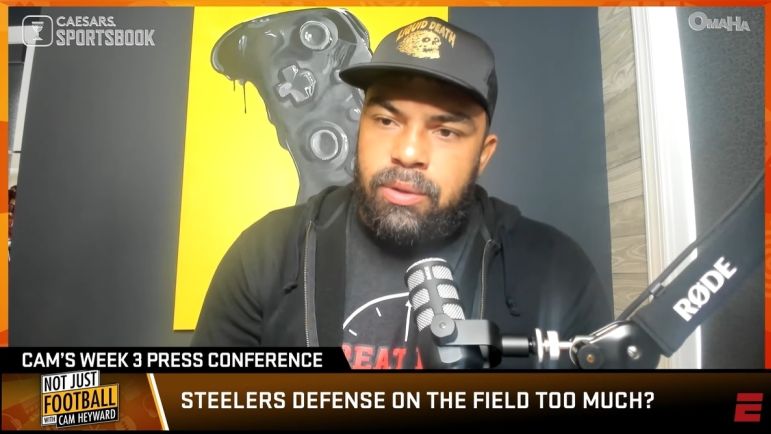 Without T.J. Watt, the Pittsburgh Steelers’ defense clearly isn’t firing on all cylinders. With Watt in, they feel like a V10 in an Audi R8. Without him, they’re a 140cc engine you have in your lawnmower. Without Watt, the Steelers’ run defense isn’t as attacking, the pass rush not as fierce, and ultimately, the defense struggles to take the football away.

There’s a variety of reasons why the Steelers’ defense has been on the field so much, on pace for an astounding 1,300-snap season, but as Cam Heyward put it, a lack of turnovers is one of those issues. Taking the ball away is a quick way to get off the field and since Week 1, those kinds of splash plays haven’t happened.

Heyward outlined the issue in his latest episode of his Not Just Football Podcast, recapping last night’s loss.

“We didn’t even have a turnover last night,” he said. “Turnovers play a big part in AFC North games. To start the year out with five turnovers and then get one last week and none this game, it’s unacceptable. We preach about attacking the ball.”

The Browns’ offense played the way the Steelers’ offense wishes it could. Ball control. Physicality. Establish the run, mix in play action, secure the football. Generally speaking, the Steelers have taken care of the football this year, just two offensive giveaways, one being the fumble/touchdown on the final lateral play of the game, but Pittsburgh still won’t win many games when they’re even in the turnover battle. They have to decisively win it, as they did in Week 1, and still needed an injured long snapper and final seconds of overtime to beat the Cincinnati Bengals.

Since that opener, the only takeaway the Steelers have is Minkah Fitzpatrick’s interception of Mac Jones in the first half of Week 2’s game. Pittsburgh’s now gone seven quarters without a takeaway, one of the many numbers this team can’t win with.

Starting with the New York Jets next Sunday, the Steelers’ defense will find ways to take back the football. It’ll get them off the field, keep the score down, and give their still-sputtering offense better field position and chances to at least settle for Chris Boswell field goals. Without defensive takeaways, the Steelers’ already tough journey the rest of the season becomes an impossible climb.

Check out Heyward’s latest episode of his podcast below.