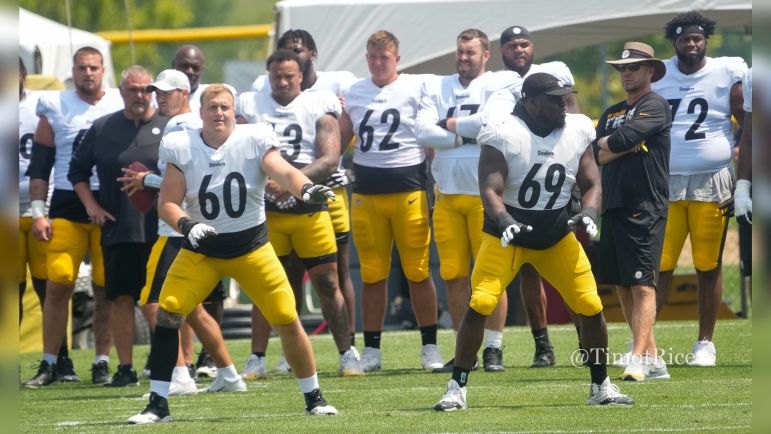 2020 was not an ideal year for anybody to be drafted, but perhaps especially not for an offensive lineman being drafted by the Pittsburgh Steelers. It was in the second year after Mike Munchak left as offensive coordinator, with it becoming increasingly apparent that his assistant, Shaun Sarrett, was not going to be the answer.

While he made it through the season, it was arguably just barely, and the team ultimately promoted his assistant, who was first hired in 2019, Adrian Klemm. He didn’t make it out of year one before leaving for a college job, replaced in-season by his own assistant, Chris Morgan, who also was not retained this offseason.

Now the Steelers have Pat Meyer, a veteran offensive line coach around the league with more experience than either of his predecessors, but not the gaudiest of resumes. No matter who he is, he is the fourth different offensive line coach the team has had since Kevin Dotson was drafted.

And he knows it would be nice to have some continuity there for the whole group, as he said when he was asked about that very topic by a reporter last week, but to which he added, “I can’t make an excuse” because the coaches keep changing, via the team’s website.

“Having an offensive line coach more than a year can definitely be a help, but nobody really cares if it takes us time, so we’ve just got to do what we’ve got to do”, he said of the offensive line needing to get better regardless of the circumstances are around the group, because the only thing that ultimately matters is their performance, not the explanation for it.

“It is good to have that bond with your coach for more than a year, so you know what they want and they know how to handle you and stuff like that. It would help”, he continued. “But if we don’t have time, we don’t have time. We gotta do what we gotta do”.

He will have continuity on his left side, for now, with Dan Moore Jr. at left tackle, but he had Green at center last season. Now he has veteran Mason Cole, whom the team signed in free agency, on his right side. One can only hope that that develops into a promising duo over time.