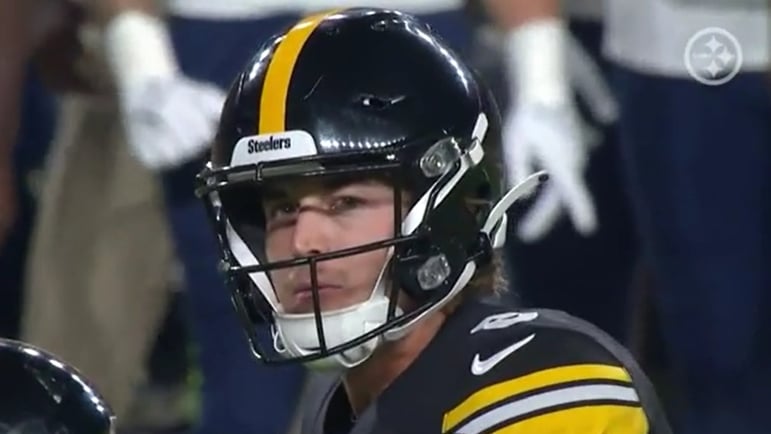 Kenny Pickett was drafted 20th overall in the 2022 NFL Draft with the intention to become the starting QB for the Pittsburgh Steelers at some point in his NFL career. However, as we sit here today, he currently stands to back up Mitch Trubisky on the depth chart who was just named a team captain for the upcoming season. There is a chance we may see Pickett put into game action at some point during the 2022 season. However, should Trubisky perform well, a redshirt season for Pickett isn’t out of the question.

Football Outsiders sees this as the most likely scenario with Pickett being the backup QB in Pittsburgh, at least initially in 2022, and ranked him #11 overall in their recent backup quarterback rankings. Pickett was lumped together with fellow rookie QBs Desmond Ridder and Malik Willis as backup QBs that can get you through a game this season.

“Pickett’s average preseason pass could best be measured in air centimeters, but he did demonstrate an ability to run the offense efficiently in hurry-up conditions,” Mike Tanier of Football Outsiders said on Pickett. “The order above is both alphabetical and intentional, with Pickett most ready to game-manage his way to a win or two thanks to his supporting cast, Willis capable of potentially surprising a Jaguars/Texans level opponent with his arm and wheels, and Ridder somewhere in between. All three remain viable quarterbacks of various futures, but this is where B-tier prospects inevitably land as rookies: they’re student drivers, and their coordinators will need to keep a foot on the brakes at all times if they are forced to start.”

Miami Dolphins QB Teddy Bridgewater was ranked as the #1 backup on the list followed by Jimmy Garoppolo, Nick Foles, Tyler Huntley, Gardner Minshew, Andy Dalton, Jacoby Brissett, Taylor Heinicke, Jordan Love, and Drew Lock before listing Pickett just outside the top ten. Bridgewater has been a serviceable spot starter and effective backup during his time in the league, making him a proven option with a high floor with low ceiling. Garoppolo and Foles deserve that ranking, having carried the 49ers and Eagles respectively to the Super Bowl in the past, with Foles winning a Lombardi in Philadelphia.

Brissett boasts a meager 14-23 record as a starting QB, being viewed as a viable backup option, but not someone you want playing an extended timeframe like he will have to do this season with Deshaun Watson getting suspended 11 games. Drew Lock got shipped out of Denver after failing to show he could become a capable starting NFL QB his first three years in the league, and Jordan Love has been a mess when asked to start last season in Kansas City or during preseason play.

This INT from Drew Lock was tough to watch 😬pic.twitter.com/BkjVPF7G65

While players like Andy Dalton and Brissett appear to be on the twilight of their respective careers, Pickett looks to be on the rise, having pushed Trubisky for the starting job in Pittsburgh during the preseason. While he does need to show more in terms of pushing the football down the field as Tanier indicated above, Pickett had a commendable preseason performance, posting the best passer rating of any rookie QB in preseason play since 2015 while completing over 80% of his passes for three TDs and no turnovers.

Highest passer rating among all rookies in a single preseason since 2015:

Pickett may not have crazy open field speed or a rocket arm, but he has shown this preseason that he is poised in the pocket and can make the right decision when the clock is ticking. For now, he remains the backup to Trubisky in Pittsburgh to start the 2022 season. However, should Trubisky struggle at any point, the drumbeat will grow louder for Pickett to be given a chance to start, throwing off the title of backup QB for the opportunity to be a starter in the National Football League.