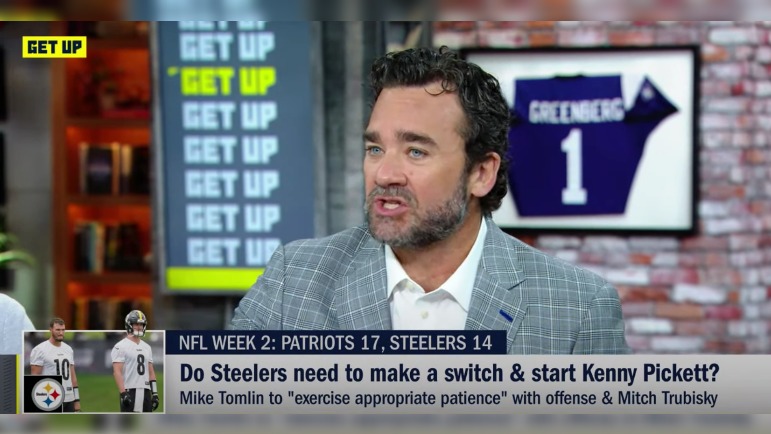 On Tuesday morning, the cast on ESPN’s Get Up! Met to talk about Pittsburgh’s loss to the New England Patriots Sunday and discussed the prospects of Pittsburgh potentially benching Mitch Trubisky for Kenny Pickett.

Jeff Saturday mentioned that while it was the right decision for Pittsburgh to roll with Trubisky to start the season, his performance thus far as a downfield passer hasn’t inspired confidence in him going forward as the starter.

“I understand why they went with Trubisky,” Saturday said Tuesday morning on Get Up! “I thought that was the best play, but not if you are telling me, ‘We can’t challenge the Patriots down the field because they’re really good at stopping big plays.’ There’s a lot there, but you still got to go attack them to open up that offense. I didn’t love that. Again, if we’re going to be patient, let’s be patient with a rookie.”

The topic of Pittsburgh not attacking down the field in the passing game against New England has been a hot topic since the game ended as OC Matt Canada was asked about it Tuesday before practice and Trubisky was hit on it prior to practice as well, stating that he needs to be more aggressive and take shots downfield to hopefully open up the offense.

Pittsburgh showed some ability to push the ball down the field in the preseason and there were a couple completions over 20 yards in the regular season opener against the Bengals, but Trubisky completed only one pass over 20 yards Sunday to George Pickens who has been relatively a non-factor thus far to start the season. Part of this falls on Trubisky not locating and putting the ball on receivers down the field, but part of it also likely falls on scheme as multiple players on the team have expressed their frustrations with OC Matt Canada and the play calling thus far through two weeks of play.

Saturday makes a fair point in saying that if Pittsburgh’s intention was to be patient with their starting QB regardless of performance, why wouldn’t they go with the rookie QB over the veteran they appear to be treating like a rookie?

Despite being told to play loose and free this training camp, Trubisky appears to be regulated in terms of how to execute plays and his ability to audible the play as called by Canada. While Trubisky is in the position to be a game manager by protecting the football and moving the offense into position to score points with a good defense behind him, you can only go so far as a team when you don’t have any semblance of a downfield passing game.

Saturday points to Trubisky as the culprit here when in reality, he and Canada are both to blame at least to some degree. Regardless, Pittsburgh needs to get these issues hashed out quickly as they prepare to face off against the division-rival Browns on a short week this Thursday in Cleveland.