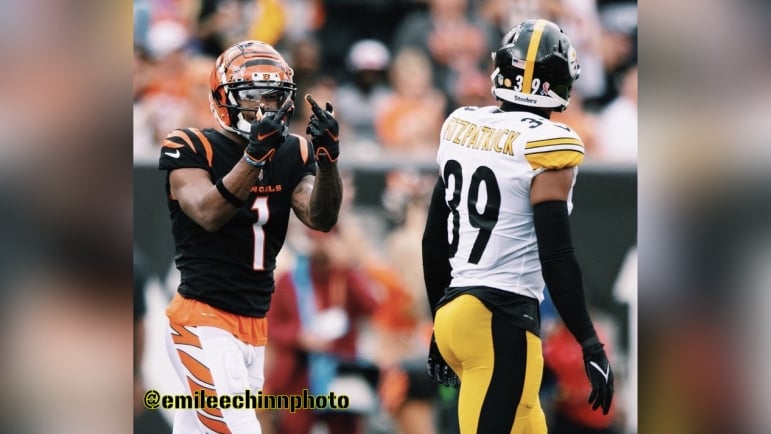 Cincinnati Bengals second-year wide receiver Ja’Marr Chase is undeniably one of the young stars in the NFL. A second-team All-Pro and Offensive Rookie of the Year last season, he was almost persistently stellar from his first game on and immediately forced defenses to treat him like a star veteran.

He nearly pulled the Bengals from behind in their season opener, as well, catching 10 passes on 16 targets for 129 yards and the game-tying touchdown—which would have been a game-winning score had they not had the ensuing extra point blocked. He also caught what should have been another touchdown minutes earlier if it was properly officiated, or if Zac Taylor had the presence of mind the challenge the ruling and not instead rush to the line of scrimmage.

Excellence, however, certainly isn’t synonymous with modesty, and I don’t think Chase has ever been accused of that. Not that he has to be Mr. Manners, on or off the field, but he got caught in a candid moment from the opener, about which he certainly doesn’t seem to have any regrets.

You’ve probably seen the picture before, but you’ll see it again below. Following his third reception of the game in the middle of the second quarter, a 3rd-and-4 conversion on which Minkah Fitzpatrick delivered a hard hit at the end, he was caught, albeit not during the broadcast, offering the All-Pro safety, let’s say, two birds in the hand.

He told reporters yesterday that it was “a cool picture” and confirmed that it’s certainly not the first time he’s made the gesture on the field before. He said it was “just the first time they caught me”. He was later penalized in the game for a taunting action, but says that he was not fined for it.

Prior to the Steelers’ opener against the Bengals, Fitzpatrick didn’t exactly play nice. Asked about the Steelers-Bengals rivalry and how it felt like there was more animosity than in, say, their rivalry with the Ravens, he said, “I don’t like any of them”. After the game, he admitted that he “came in wanting to make a statement”.

He certainly managed that, and he made his feelings clear with his performance. His tackle on Chase was just one of 14 for him on the day, and he also had two pivotal plays—a pick-six early in the game and then a blocked extra point that sent the game into overtime.

So I’m sure he couldn’t care less which fingers or how many Chase wants to show him after any given play. All he cares about his winning and playing well while doing it. Mission accomplished for Fitzpatrick and the Steelers while, for now, Chase’s finger display merely represents the number of losses the Bengals have through one game.