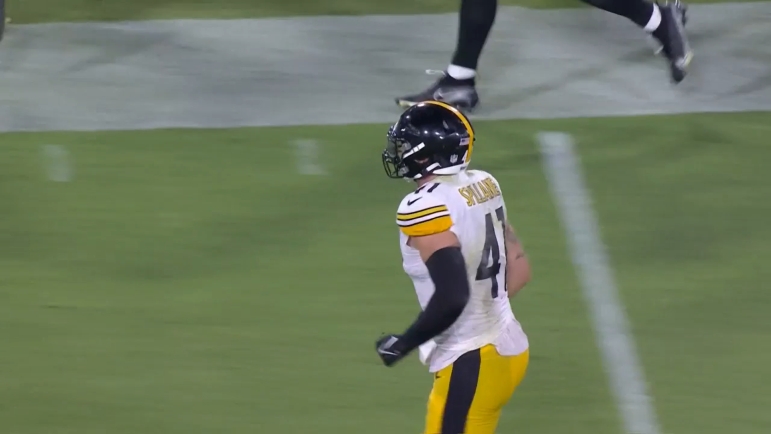 With three games under their belt, the Pittsburgh Steelers’ offense ranks 30th in the NFL in average time of possession in regulation at just 24:15 per game. That means their defense is on the field a lot longer than most teams, and with their Week 3 loss against the Cleveland Browns coming off a short week, the idea that the defense is tired and the other team has an advantage has been floated around. Inside linebacker Robert Spillane said the defense isn’t focusing on the offensive’s limited time of possession.

“We don’t focus about that. We think about when we’re on the field, we have a job to do. We have assignments to execute, plays to make. For us, it’s not about how we get on the field, it’s how we get off the field,” Spillane said via Steelers Live on Twitter.

Robert Spillane and Terrell Edmunds spoke to the media about executing and communicating on defense, stopping the run, and more. pic.twitter.com/IcsJDNFALV

It’s true that the defense has to be better at doing what they’re asked. Last night, they let Jacoby Brissett look like a Pro Bowler and let the Browns run all over them. Kareem Hunt and Nick Chubb are two of the best back in the league, but the run defense was still not up to par. Obviously, Spillane isn’t going to his offense under the bus, but constantly being on the field has to play a factor and fatigue is going to affect things.

Heading into last night’s game, the defense spent over 76 minutes on the field. Last night, they spent another 36 minutes. At some point, they’re going to hit a wall if the offense doesn’t pick things up and isn’t able to sustain drives and possessions. The defense needs to be better, but right now, they’re getting very little help from the offense.

The loss of T.J. Watt also leaves the defense depleted, and they’re really struggling to get pressure on the quarterback, which is leading to longer drives because the quarterback has more time to throw and find an open receiver. So there’s no argument the defense has to be better, as well.

Still, they need some help from the offense so they aren’t on the field 40 seconds after they got off. The issues get exacerbated on a short week, which is why the time of possession is more of a topic of discussion today, and hopefully, the defense has time to recover with a 10-day layoff ahead before the team’s next game against the New York Jets.

But if the trend of the offense going three-and-out and not sustaining drives continues, you’re going to see some blowouts this year. It’s not sustainable to ask the defense to be able to go 100% for over 33 minutes a game in consecutive weeks without fatigue setting in. We’ll see what happens against the Jets a week from Sunday.