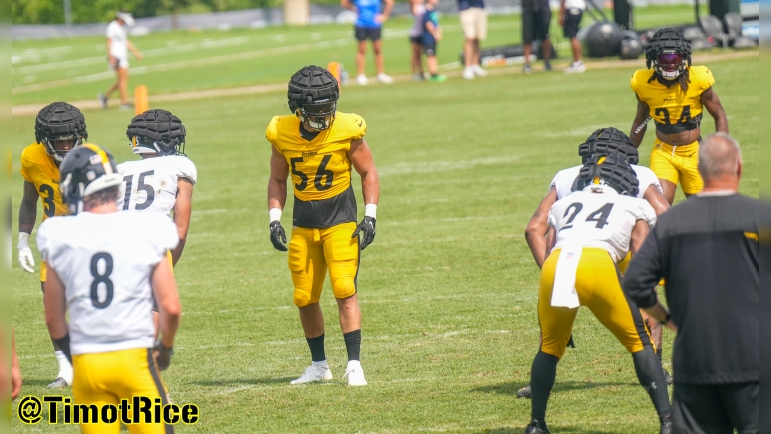 For this season’s version of the Pittsburgh Steelers, it’s likely to be one that’ll have to rely on the strength of it’s defense to keep itself in games, as the team’s 12th-ranked schedule pits it against some of the top offenses in the game. Up first this coming Sunday is none other than the Joe Burrow-led Bengals, who won the AFC last season and came oh so close to bringing a Lombardi Trophy back to Cincinnati.

For promising third-year outside linebacker Alex Highsmith, he thinks not only is it a good measuring stick for the team’s defense right off the bat, it’ll allow the team to make up for the two lopsided losses last season.

“This is tough test for us going into Cincinnati week one, but I think it’s about what we do,” Highsmith said via Steelers.com after today’s practice. “I think it’s about, can we execute the calls that we have at hand. And so, like I said, I’m excited to go in there, especially last year, we didn’t get off to the best start. So I think this year, the last two times really, it’s gonna be important for us to get off to a fast start.”

In the two division games against Cincy last season, a fast start is the last thing the team got off to, falling behind to halftime deficits of 31-3 and 14-7 in both losses, outscoring Pittsburgh 65-20. The Steelers were embarrassed in almost every phase of the game, especially on the ground, where Bengals Pro Bowl running back Joe Mixon gutted them for 255 yards rushing combined and two scores. Furthermore, on a team which led the league in sacks for a fifth straight season with 55, and featured the DPOY T.J. Watt and his record-tying 22.5 sacks, the team only brought Burrow down twice in two games.

Many media outlets have highlighted Highsmith as a potential breakout candidate as he enters year three, and he has shown improvement in each year thus far as the bookend to Watt, recording two sacks as a rookie in 2020, and six last season. He will again be looked at as an integral piece to the team’s sizzling pass rush, and getting home on Burrow entering Sunday to disrupt the team’s banner passing game will be central.

It’s a recipe that worked well for the team in last season’s upset win at Buffalo, where the team sacked MVP candidate Josh Allen three times, and rode its defense to the 23-16 win, holding the explosive Buffalo offense to a mere six points in the second half. And for a team in Pittsburgh picked by many to bring up the rear of the AFC North, Highsmith feels jumping on the Bengals fast, and being the hunter, not the hunted, will be of utmost importance come Sunday at 1 PM.

“I think that’s just the main thing we gotta do for this game is come out and start fast. And so I know when we do that, on offense and defense, we can be successful. So I’m excited for it and I just can’t wait for it.”