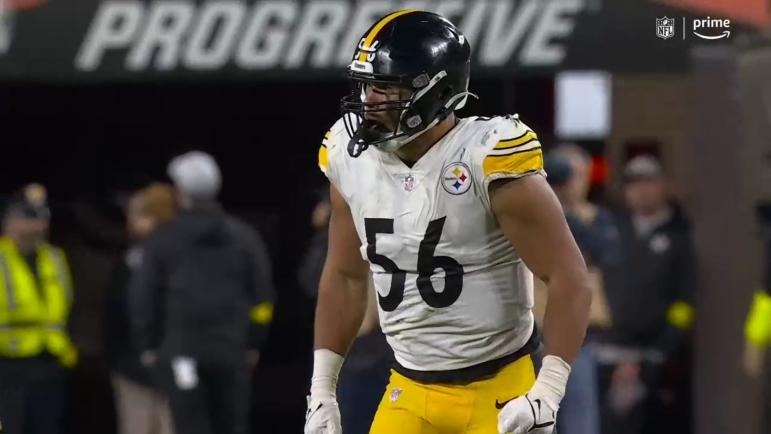 As a rookie, it’s hard to beat two teachers like T.J. Watt and Bud Dupree. Two ultra-athletic former first round picks with great work ethics, guys who showed clear progression season after season. Alex Highsmith has done all he can to be a student of the game and in a sit down interview with CBS reporter Aditi Kinkhabwala, Highsmith discussed what he learned from both men. From Dupree, Highsmith learned how to improve his first step.

“Bud taught me a lot about his get off,” he told Kinkhabwala via 93.7 The Fan. “I think his get off is crazy fast. I remember seeing him for the first time during camp. I’m like, ‘this dude’s unbelievable.’ So I just kind of tried to listen to what he talked about and what he watched when it comes to get off and try to see what he studied. Because like I said, he had one of the craziest get offs I’ve ever seen. I feel like that helped me a lot and my game.”

Dupree was a freak athlete coming out of Kentucky. A raw player who didn’t even have a dedicated coach in college to teach him, it took him years to stay healthy and figure out the NFL before his he looked like the first-round pick the Steelers made him. But he flourished in Pittsburgh’s scheme over his final two seasons, breaking out in 2019 with 11.5 sacks and registering eight the following year before an ACL tear cut his season short. Any edge rusher worth their weight needs to have a great get-off and Highsmith has gotten quicker off the ball throughout his career.

Of course, Highsmith is still learning from T.J. Watt, one of the game’s great defensive players, picking up different rush moves from him.

“With TJ, I wanted to learn more of the ghost me that he does…and that was one thing I asked him about.”

The ghost move was made popular by Von Miller, faking a long-arm bull rush before dipping and turning the corner without ever making contact with the tackle. It’s a weapon Highsmith has used since his rookie season.

Another ghost rush from Alex Highsmith. Second time in last three games he's pulled it off. Cornered but lost his balance at the end and missed out on the sack. #Steelers pic.twitter.com/BfVEkVPw1Q

Like Dupree, Highsmith has began to break out after getting healthy and spending time in the league. Through three weeks, he leads the league with 4.5 sacks, three of them coming in the season opening win over the Cincinnati Bengals. Highsmith makes up half of the team’s total and they’ll rely on him through October until T.J. Watt returns from his pec injury. Highsmith credited the mentorship of both men for making him the player he is today.

“Not only are they two of the best in the league at what they do, they’re willing to help a guy like me coming in as a rookie.”

If Highsmith’s strong play continues, he’ll join Dupree and Watt as not just successful pass rushers but ones who get paid like it, too.