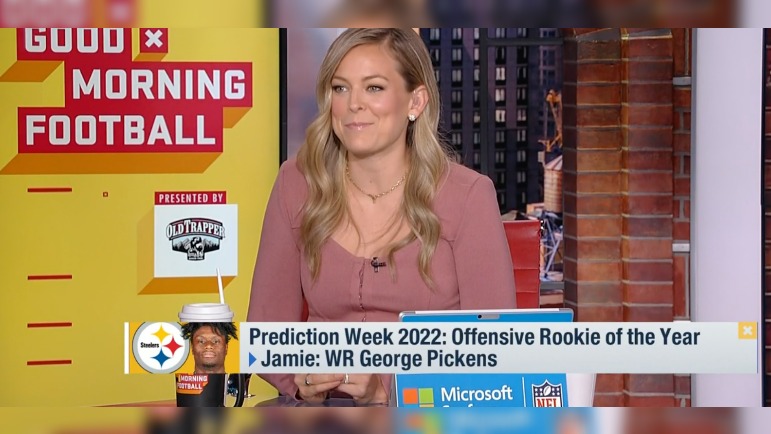 On Monday morning, the cast of GMFB on NFL Network took part in a segment where each show host made a case for their 2022 Offensive Rookie of the Year. After Peter Schrager made his case for RB Breece Hall and Jason McCourty chose WR Treylon Burks as his prediction, Kyle Brandt brought forth Pittsburgh Steelers QB Kenny Pickett as his pick for Offensive Rookie of the Year.

“What have I been saying all preseason?” Brandt said on GMFB. “Some guys just have it. Kenny Pickett has taken the field and has it. I think there will be some offensive struggles with Pittsburgh early on. I think the defense will be carrying a lot of water. And I think that man is going to take the field and have a surge, almost a Roethlisbergerian youthful surge coming off the bench as a young star quarterback. Kenny Pickett come playoff time with by the Offensive Rookie of the Year for the Pittsburgh Steelers.”

Pickett has been everything the Steelers were hoping for after they drafted him 20th overall in the 2022 NFL Draft. He has quickly progressed during training camp and the preseason, completing 29-of-36 pass attempts for 261 yards and three touchdowns with zero interceptions. He showed poise in the pocket and remained cool under pressure moving the offense down the field in the two-minute offense on two separate occasions for TDs. While he currently sits behind Mitch Trubisky on the depth chart, many expect it to be only a matter of time until Pickett comes off the bench and starts his career as the starting QB for the Steelers for years to come.

After Brandt made his case for Pickett, Jamie Erdahl built off his argument for the Pittsburgh QB to support her choice for Offensive Rookie of the Year: WR George Pickens.

“I’m going to use Kenny Pickett and he is going to make George Pickens the Offensive Rookie of the Year,” Erdahl said on GMFB. “George Pickens has something special, and it has to be harnessed in the right way. You see him shoving guys off the line of scrimmage. You see the spectacular catches. All of it embodies who this George Pickens is going to become in the NFL.”

Pickens has taken the NFL world by storm since training camp began at Saint Vincent College, making impressive acrobatic catches in coverage against the first team defense while embodying the physicality that Pittsburgh desires to have in its wide receivers. His talent is immense as we saw in his first preseason game against the Seattle Seahawks, showing the body control to make sideline catches as well as hauling in a TD in the back of the end zone. He also has shown natural hands as a pass catcher, making catches in coverage look routine.

There’s no doubt that Pittsburgh got two future contributors on offense with their first two picks in Pickett and Pickens. While both players may have others in front of them right now on the depth chart, both have shown that they are capable of playing quickly in the regular season if their number is called, with Pickens likely seeing the field first as a starting WR in three receiver sets. If Pittsburgh can say that they have two candidates for Offensive Rookie of the Year at the end of the season with Pickett and Pickens, it would be a good sign of the offense coming together this season and a sign of what is to come.