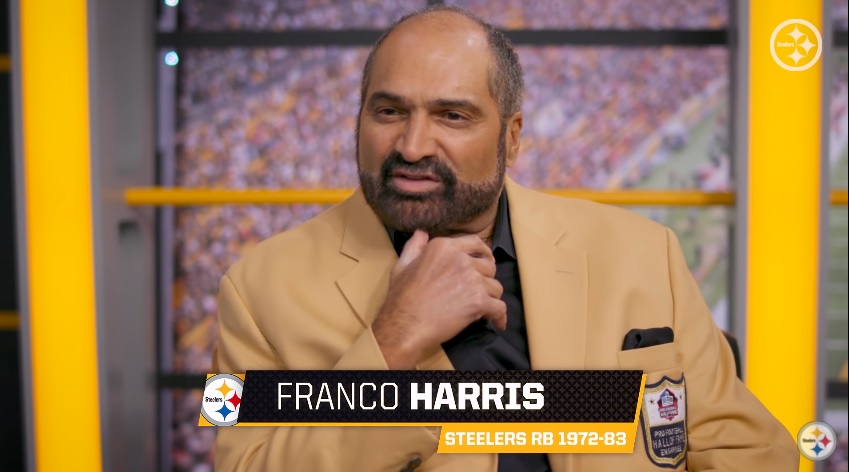 While former Steelers running back Franco Harris and current running back Najee Harris have no actual familial relations (unlike current Steelers running back Jaylen Warren and former back Willie Parker, who are cousins), they’re both running backs apart of the Pittsburgh Steelers family. In the press conference to announce that his No. 32 will be retired during the Steelers-Raiders game on Christmas Eve (also the day after the 50th anniversary of the Immaculate Reception), the elder Harris praised the younger Harris.

“I’m a fan of Najee and what he did last year. He made me a fan,” Franco Harris said. “We know he’s doing great things as a running back and plus we know that he’s a great human being,” Harris added. “I really like my cousin, what he’s doing so far,” Harris said via the team’s YouTube channel.

I can’t imagine that there are many players that Najee Harris would rather be praised by than Franco Harris. Franco is about to become the third player in team history with his number retired, is responsible for the most famous play in Steelers’ history with the immaculate reception, was a nine-time Pro Bowler and racked up over 12,000 rushing yards in his career. That’s not a career I think Najee would be too upset having. And he’s certainly on his way to having a pretty great career as he’s coming off a rookie season where he broke Franco’s Steelers’ rookie rushing record as he totaled 1,200 yards on the ground, surpassing the 1,055 that Franco totaled as a rookie.

Off the field, Harris started a nonprofit called Da’Bigger Picture Foundation and helped replace the carpet and numerous other outdated appliances at one of the shelters he grew up at in California, per a story from ESPN’s Brooke Pryor.

As it stands right now, it seems as if Najee is well on his way to making his older “cousin” proud (and I’m not talking about Josh). If he can build off his rookie season and put up close to the numbers that Franco did, Pittsburgh will prove the doubters wrong that thought taking a first-round running back was a mistake. Hopefully, he gets more help from the offensive line than he got his rookie year (and appears he will be getting this year), but Najee definitely seems to be an elite talent who can be the RB1 in Pittsburgh for years to come.

If Najee is able to keep up his career trajectory, I’m sure he’ll continue to make Franco proud and the fans in Pittsburgh happy. When Franco’s number is retired on Christmas Eve, it sure would be fitting if Najee is able to put up a nice performance against a Raiders’ run defense that ranked 19th in rushing yards allowed last year.