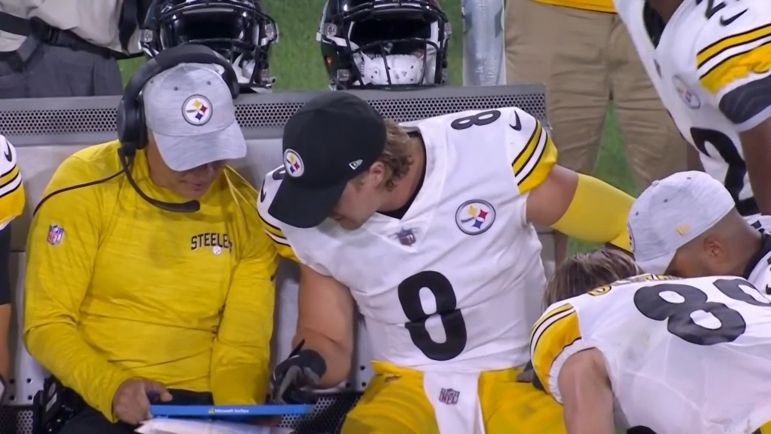 Steelers first-round draft pick at quarterback, Kenny Pickett, has impressed enough through the preseason to officially win the backup job in Pittsburgh. One spot he particularly impressed me was his efficiency and mental processing pre-snap when it came to run-pass options (RPO), a staple in the Matt Canada Offense.

Considering the Steelers had the most downfield RPO pass attempts in the NFL last season, according to PFF.  Pickett will fit right in.

This preseason, he went 4 of 5 for 36 yards on RPOs and would have been 5 of 5 if it weren’t for a drop. While the yardage isn’t necessarily impressive, the film is encouraging when you look into it deeper.

First, let’s take a look at the Steelers’ base RPO play.

This concept will be the base of each of these clips. 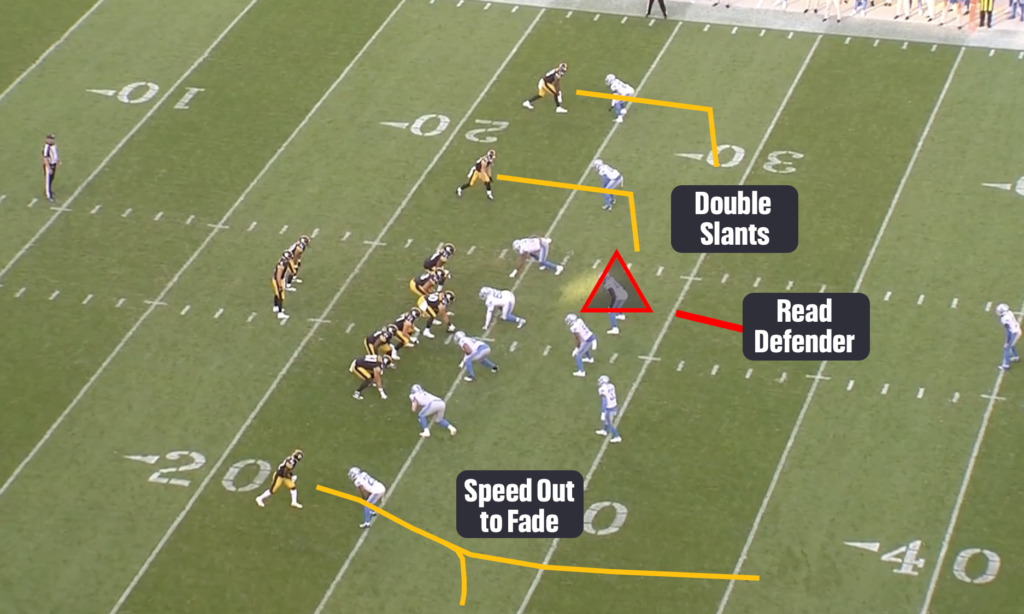 Now let’s take a look at it in action.

Presnap, the defense is showing cover 1, man coverage underneath with one deep safety.

Pickett’s main read is going to be the linebacker to the double slant side. If the LB moves to his left or comes up to the play the run at all, Pickett should pull the ball and whip it to the inside slant.

The defense being in cover 1 gives Pickett the green light to trust his receivers on the outside to win their matchups. With the slot WR lining up off the ball, it naturally gives him space to successfully run a slant if the cornerback gains any depth off the snap. 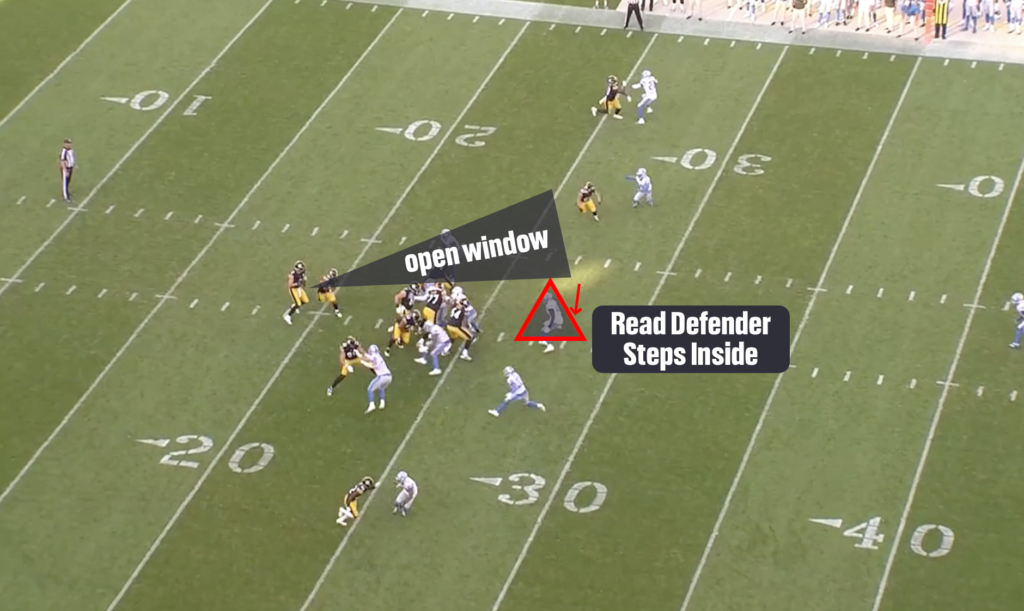 When the play starts, the linebacker immediately flows to his left and the cornerback takes two read steps backward. Now, it’s game on for Pickett and WR Gunner Olszewski to take advantage of the wide-open passing lane. Easy first down, and almost a whole lot more if it weren’t for a diving tackle.

I also love Pickett’s footwork. Look at how quickly he snaps back to his base after pulling the ball from the RB. There’s no wasted movement and a whole lot of urgency. He almost always throws from a great base and it’s a large reason for his high level of accuracy.

Below, we have the EXACT same looks from the offense and defense, just going the opposite direction of the football field.

With the linebacker sliding to his left as soon as the ball is snapped, the slot slant would be open again, but Pickett wants a little more. As previously mentioned, the boundary WR will be running a fade when the cornerbacks play up near the line of scrimmage. 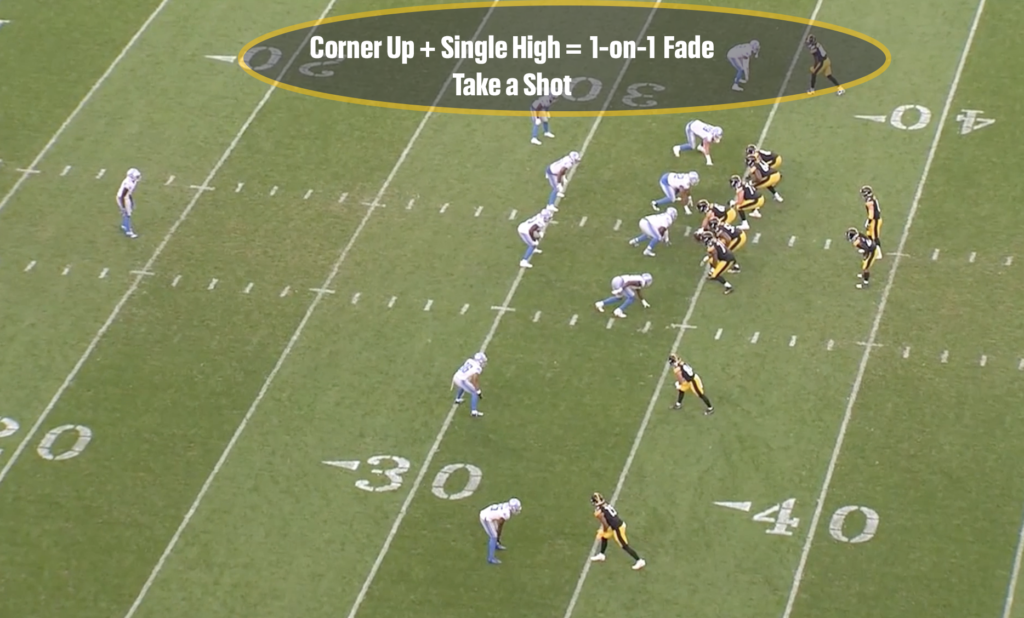 With only a single, deep safety, if you trust your guy to go get it, you can throw this up all day.

Pickett delivers from another great base and it’s a perfect ball, hitting Tyler Vaughns right in the hands. That’s a play you have a finish as a wide receiver trying to grab hold of a spot at the table. 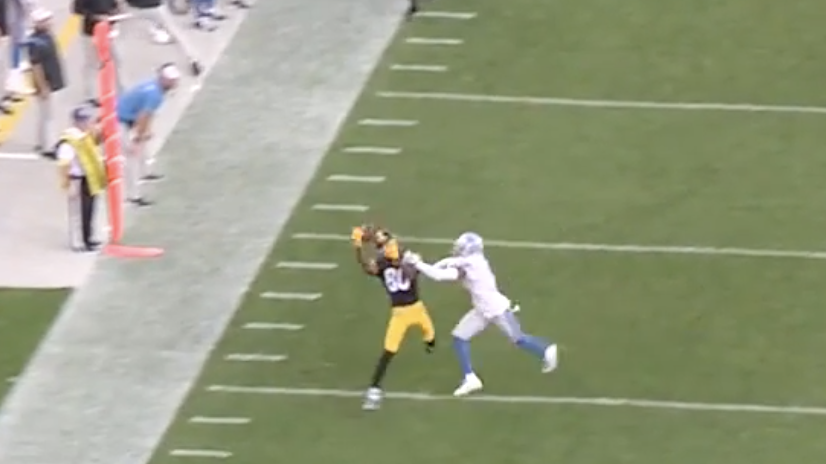 Now, we get two examples of the cornerbacks playing off coverage. With this look, the boundary receiver is set to run a speed out. 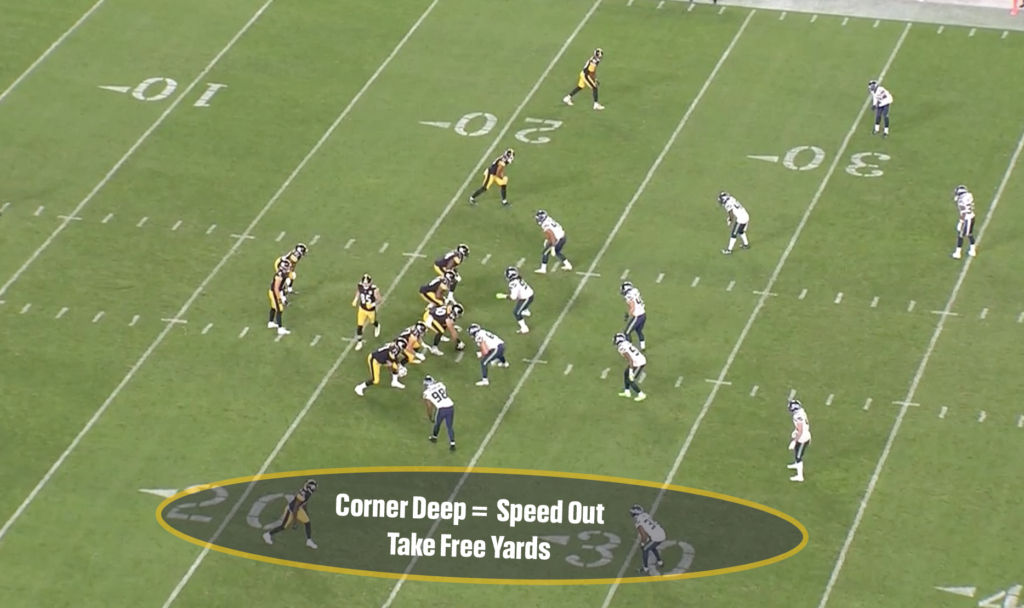 Pickett is A-okay with taking free yardage if you’re going to give it to him. He sees this look pre-snap and is going there all the way. Knowing he’s going backside, there’s zero reason to mesh with the running back. Instead, he goes right into his rhythm throw to the receiver. This might as well be “routes on air.”

Here’s the last clip we’ll walk through. It’s a similar look from the defense as the first two clips, except now, the wrinkle is the box safety now on the double slant side. 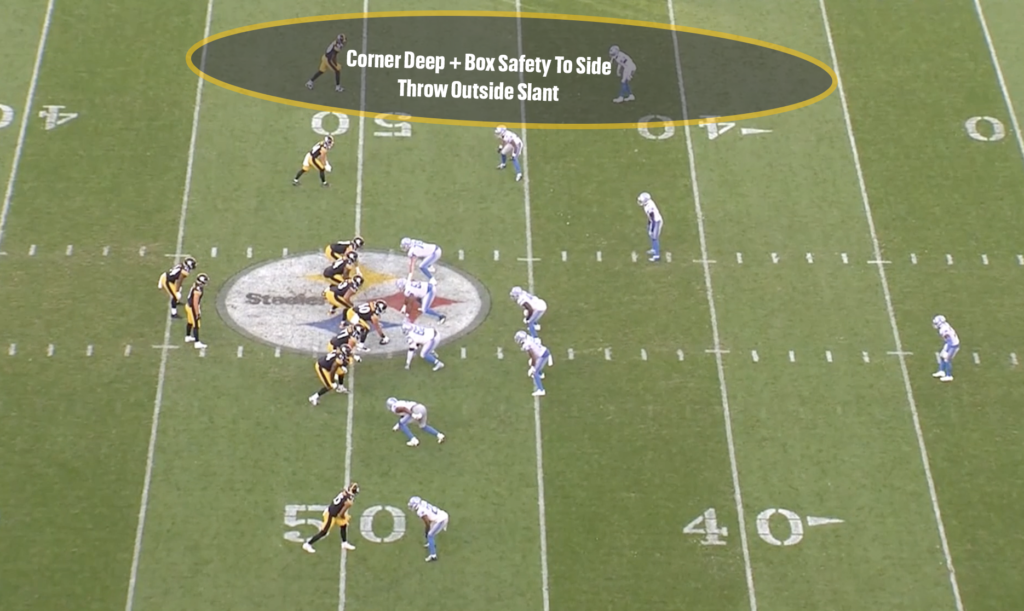 The box safety begins to creep down presnap, however, Pickett is already adapting in his head. He likely already noticed the depth of the outside corner and was going outside slant all the way, but it’s an especially good decision with the safety screaming through the inside slants throwing lane. Another nice RPO rep.

It’s hard to truly ‘WOW’ anyone with RPO throws, but I enjoy interpreting and trying to dissect Pickett’s brain and mental processing this early in his NFL career. I’d be doing a disserve to the readers if I didn’t also mention that many of the coverages shown in the preseason are going to be extremely basic, with hardly any disguises. But, at the same time, you can only play against what you’re shown.

All arrows are pointed up for Pickett and while he won’t be the initial starting quarterback of the Steelers, he seems like he’ll be ready if the team has to turn to him at any point this season.