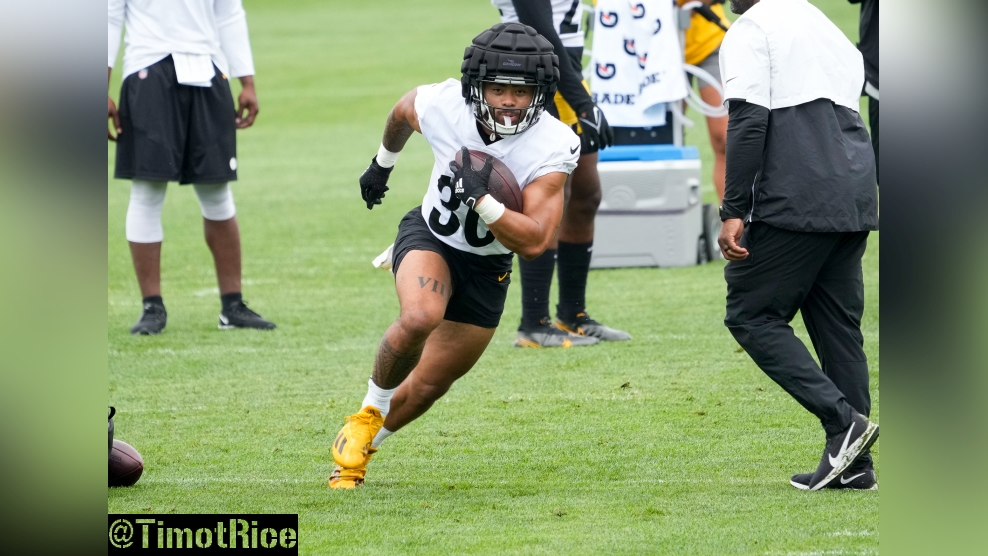 Every year, the team has a “camp darling” emerge through training camp. Camp darlings are guys with underdog stories, often undrafted free agents or futures signings from the year before, that impress enough through training camp and preseason games that at least warrant a conversation about making the 53-man roster. Some notable camp darlings that have come through Pittsburgh the last few years include the likes of Mike Hilton, Tuzar Skipper, Damoun Patterson, and Howard Jones.

This year, undrafted running back, Jaylen Warren has staked his claim to the “Camp Darling” notoriety. We now know as of yesterday, he showed enough to the Steelers coaching staff to warrant a spot on the initial 53-man roster.

Been a long journey for Steelers’ RB Jaylen Warren. Two-star recruit. JUCO to Utah State to Oklahoma State. Undrafted and signed with Pittsburgh.

Impressed in camp, ran hard during games. Now officially on the 53-man roster. That’s pretty special. Kudos to him. #Steelers

Even though some may argue Warren wasn’t a “bubble” guy going into the final preseason game, thanks to a relatively weak running back room, he proved why you can’t keep him off this roster. One may look at his stat line of 7 carries for 11 yards (1.6 average) and grimace, but a lot of that is attributed to running behind a poor offensive line, many of who are no longer on the roster as of yesterday. Let’s take a look at some of Warren’s film and see how he managed to impress outside of the box score.

One of the most important abilities to have as a young running back trying to make the backend of a roster is pass protection. Half of pass protection as a running back is the ability to mentally process what the defense is showing combined with the offensive line’s calls. The other half is the sheer grit and ‘want to’ to put your face in the fan as a 250+ pound man runs full speed at you. It’s why the backs on backers drill at Steelers training camp is always a must-watch. It separates the men from the boys.

Warren has that ability and then some. He’s shown that through the previous preseason games and Sunday was no different. Watch below as he gets a fantastic chip on the end rushing off the edge. He uses his already low frame to dip down and explode into the defender. Not only will that effort excite coaches, but it will also make your offensive lineman happy knowing you can make their job a bit easier.

Seeing the numerous chips from Jaylen Warren this preseason sends me back to the days of DeAngelo Williams in Pittsburgh where he seemingly had a nasty chip every week.

DeAngelo Williams has been a chip-block monster this year. BOOM. And the reception pic.twitter.com/q7JgCfwPeX

This wasn’t the only play Warren made away from the football that impressed me. He played a big part in the Steelers’ largest run play of the day of 12 yards. Follow him as he acts as a lead blocker on this Gunner Olszewski jet sweep. There is zero hesitation in Warren’s game. He sees a target and acts as a heat-seeking missile once he locks on. One broken tackle from Olszewksi and this play turn into six points for the offense.

As I previously mentioned, there’s not a whole lot to write home about in terms of running plays for the Steelers as a whole. However, Warren did provide some examples of what he can provide in the run game.

On this counter play, I love the burst Warren shows to get to the edge. He then finishes the play by lowering his shoulder into a Lions defender before going out of bounds. The dude absolutely craves contact.

Just look at the angles Warren had to outrun here. Most backs on this roster likely wouldn’t have been able to win the edge here. Impressive stuff. 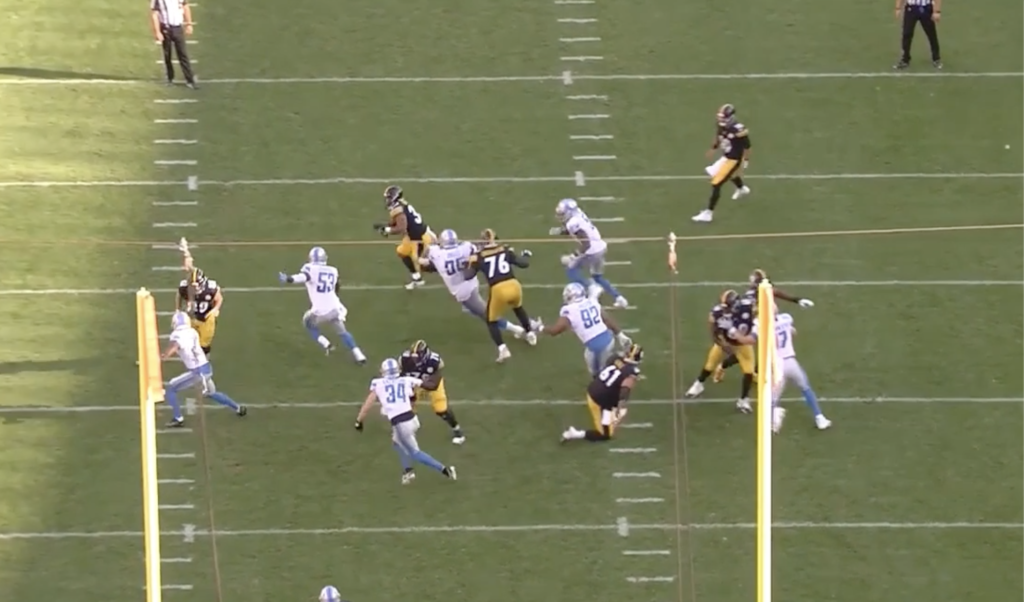 Warren is able to combine his burst with power and it packs a punch. Look at the way he’s able to lower his head, both hands on the football, and barrel through two defenders. He picks up an extra two yards in the process.

Guys that can create extra yardage, getting five yards when there are only two or three yards there to get, are vital to an offense, especially for a team with a poor offensive line. It’s a big reason why Najee Harris was the only running back I was okay with selecting in round one in last year’s draft. If you’re not going to have a good offensive line, you better have some backs that can create on their own.

It wasn’t a crazy fantasy day for Jaylen Warren but he further cemented his claim for a spot on this team. You need guys like him that embody what you stand for as a franchise, hard-nosed, tough, and willing to do the dirty work.

Warren was rewarded with a spot on the opening day roster and I’m excited to see what he can bring to the table as the much-needed RB2 behind Najee Harris.