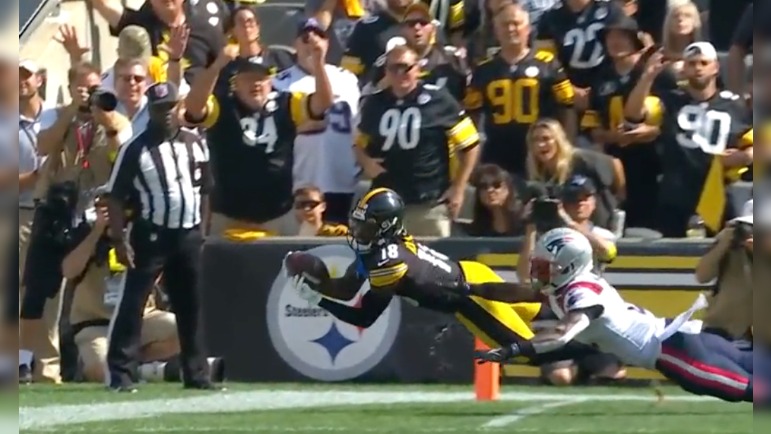 The Pittsburgh Steelers lost a close one at Acrisure Stadium Sunday to the New England Patriots, falling by a score of 17-14. The offense once again proved to be the Achilles Heel for Pittsburgh as the team failed to sustain drives and put more than one touchdown on the board.

Despite the struggles of the offense, WR Diontae Johnson has gone about his business as the #1 target in the passing game and has represented himself as such through two contests. While the stat sheet may not show it, Johnson has been routinely making plays and generating separation in the secondary.

What’s frustrating when watching Johnson is his usage and seemingly lack of connection which Mitch Trubisky in the offense. There were several times in Sunday’s contest where the two failed to connect for one reason or another.

Here on this slant flat concept where Johnson runs a slant to the middle of the field and Najee Harris runs to the flat, Johnson gets held up by #2 Jalen Mills as he breaks inside, delaying his release. He manages to get back on his route, but Trubisky throws the ball before Johnson can get to his landmark. It’s likely a timing thing so Trubisky can’t fully be at fault here, but if he were to locate Johnson with his eyes before throwing the ball, the two would have a better chance to connect.

Here is another example where Johnson beats Mills at the LOS and runs up the sideline on the go route, but Trubisky’s pass is high an outside, carrying Johnson to the sideline where he attempts to make a circus catch with one hand along the sideline while dragging his feet in-bounds. He is unable to reel in the difficult grab as the pass would have had a better chance of being completed if Trubisky would have dropped it into the bucket better instead of taking Johnson out of bounds.

Johnson wasn’t asked to work deep down the field often Sunday, but when he did, he did manage to get open against coverage. What’s frustrating though is Trubisky choosing to check it down rather than attack with Johnson when he finds open space like on this play where Johnson works back to the middle of the field at the bottom of your screen, clearly getting a step on Mills in coverage. Still, despite having the middle of the field wide open, Trubisky checks it down to Harris near the LOS. Given Trubisky’s comments about calling concepts to target the middle of the field after the game, here is one example where it was drawn up, but he didn’t look Johnson’s direction.

And when Trubisky would target the middle of the field with Johnson as the primary target, he tried to fit it in somewhere he had no business throwing it to. A clear example of this comes on his INT where Johnson an in-braking route, but Trubisky tries to fit it in with #30 Mack Wilson sitting in-front of Johnson as an underneath defender in zone coverage. He manages to tip the pass into the air as Mills catches the tip and starts to run back the INT.

While Trubisky and Johnson were unable to connect on several attempts, he still managed to haul in 6-of-10 targets for 57 yards against the Patriots. On his receptions, you see Diontae execute his trademark crisp route running to get ample separation. Here on this completion near the chains, Johnson gives a head fake and job step inside before breaking outside toward the sideline. He waits for Trubisky to throw the pass that is a tad late and makes the catch with Mills bearing down on him, securing the catch with both feet in-bounds as Mills decks him on contact.

Here is another catch Johnson makes on Mills where he takes him up the left sideline then works back to the ball, hammering down on the breaks as he comes back to the ball and makes the catch for a pickup on nine on the play.

Johnson’s combination of speed and quickness makes him a difficult receiver to cover. He has the nuanced route running to make clean cuts to generate separation toward the sideline or the middle of the field, but he also can stack defenders vertically, thus putting corners in a bind having to choose how to play him. Here against Mills who is in off man coverage, Mills turns to a bail technique in coverage with Johnson in his vicinity, looking to prevent getting beat deep. Mills exposes his back to Johnson who immediately breaks to the sideline, creating five yards of separation for the easy pitch-and-catch for first down yardage.

When facing zone coverage on this rep, Johnson does a great job locating to soft spots in coverage, breaking back to the ball quickly and gives Trubisky an easy completion at the sticks for first down yardage.

While a route running savant that does well at getting open, Johnson has quietly become a viable pass catcher when contested in coverage. He made an exceptional catch last week against the Bengals along the sideline in close quarters with the corner and had a few more of those moments this week against the Patriots where he makes the grab with a defender draped all over him. Here are two such instances, the latter coming on the two-point conversion to put Pittsburgh within three at the start of the fourth quarter.

Overall, it was an average performance on paper for Diontae Johnson as he mainly was utilized in the short and intermediate quadrants of the field on short crossers, bubble screens, or passes toward the sideline. There were opportunities for Johnson to get looks down the field or over the middle, but he and Trubisky never connected on such attempts. When looking at Johnson in this matchup and the matchup prior against New England, I think of the meme of the nice sports car sitting under the cover of a trailer home. He has shown the ability to get open frequently and win down the field, but he and Trubisky haven’t been able to connect for any big plays the last two weeks.

While it could be a mixture of QB play, scheme, and who is the first read on a certain play call, Johnson undoubtedly has been in position to make more plays than he has thus far in 2022. It’s frustrating to see a receiver of Johnson’s caliber being relegated to a short area target, averaging 8.6 YPR when he has shown he can do so much more down the field as a deep threat.

Until the offense improves via more deep shots called or improved play by Trubisky, Johnson looks primed to excel as a short area target yet again as a target hog in Pittsburgh’s offense. However, after watching the tape, there appears to be meat left on the bone in terms of what Johnson is capable of if they would choose to let him off the leash and utilize him to his full capabilities.

What are your thoughts on Diontae Johnson’s performance against the Patriots? Do you think that he is being sold short of what he is capable of? Do you see his usage or role in the offense evolving throughout the season or staying the same? Please leave your thoughts in the comments section below and thanks again for reading!