With the Pittsburgh Steelers now set to open their 2022 regular season on Sunday against the Cincinnati Bengals, this Saturday makes for a perfect opportunity for us to take our first look at the team’s 2023 salary cap situation.

While a lot of things will certainly change between now and the end of the 2022 season, this quick snapshot of the Steelers’ 2023 salary cap situation should provide a fairly nice, yet rough, outline at what things will look like for the team once the initial Rule of 51 is established.

This look ahead at the Steelers’ 2023 salary cap situation includes a lot of educated projections in addition to actual amounts of salary cap charges for the 34 players that are currently under contract (excluding players who void) with the team next season. The players who are set to void are being counted in this projection as dead money until something changes. Basically, that is only cornerback Cameron Sutton.

The 2023 offseason workout bonus placeholder amount should once again be $849,600. I am also projecting that the Steelers will rollover $5 million in unused 2022 salary cap space to 2023. That number obviously could wind up being a little higher but it’s nice to overshoot a little just the same.

The Steelers will have a lot of fairly predictable offseason expenses in 2023 and that is the case every year. You can see a breakdown of most those projected expenses below. They total up to be a little more than $22.575 million with $9 million of that being available space for the team to use come Week 1 of the 2023 regular season.

In essence, the Steelers, as we sit here today, effectively have -$7,387,995 in projected 2023 salary cap space to work with. Don’t be alarmed about that number being over the cap as the offseason moves in several different mile markers, if you will. To be specific, around $17.575 million of those projected future salary cap expenses for 2023 don’t really come into play until the final roster construction takes place and after the Rule of 51 comes to an end. Those projected future salary cap expenses are only provided as a guide of what needs to be accommodated at some point.

Now, at the very bottom of the table below there is a list of notable players the Steelers can do full restructures on, along with the savings each would create if done fully and without any voidable years being added. Watt once again obviously becomes a heavy candidate for a restructure at some point next offseason should the team need additional salary cap space. Safety Minkah Fitzpatrick and wide receiver Diontae Johnson follow him. Yes, there are other players who can be restructured if needed, but I think the candidate list will ultimately include the three players mentioned and them only.

As for other offseason salary cap savings for 2023, there is one main elephant in the room that needs attention and that is quarterback Mitch Trubisky. It could obviously go either way with Trubisky next offseason and it all depends on how he plays in 2022 and how rookie quarterback Kenny Pickett progresses. It’s not out of the question that Trubisky could wind up elsewhere by the start of the 2023 regular season. It’s something to only keep in the back of your mind.

Once again, this salary cap outlook for 2023 is way, way early and full of projections and it is a very rough first look. Even so, it should give all of you reading this post a pretty loose guide as to where you can expect the Steelers to be at after the 2022 season ends.

As the 2022 season progresses, I will periodically provide updates on the Steelers’ 2023 Rule of 51 number along with updated projected numbers. 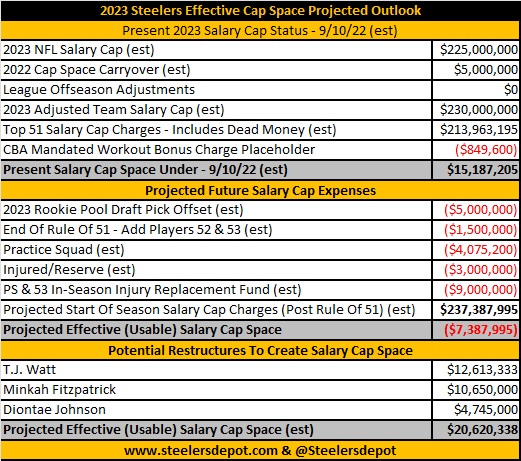