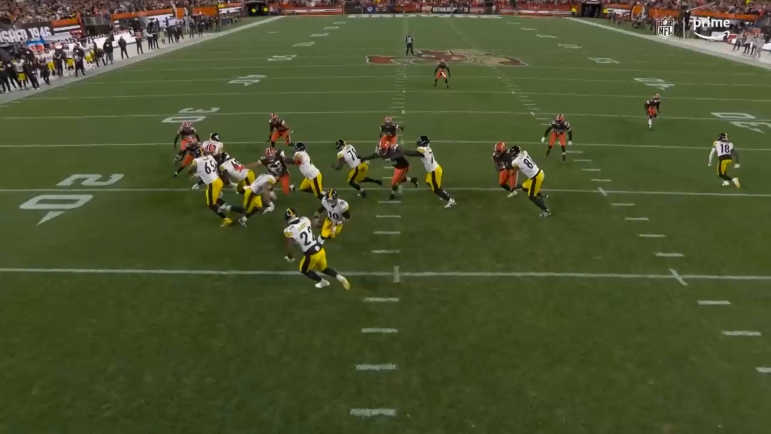 If there’s at least one positive to come out of the last two performances by the offense of the Pittsburgh Steelers, it’s the improvement that the run game component within the offense has shown.

Heading into the 2022 season, the Steelers made it an emphasis to get back to running the football at a consistent level, providing the offense some balance. Week 1 against Cincinnati that wasn’t quite the case, but in Weeks 2 and 3, the Steelers showed some real life in the ground game, both from a running back and offensive line perspective.

Against the New England Patriots in Week 2, the Steelers rushed for 91 yards on 22 carries. In Week 3 against the Cleveland Browns on Thursday Night Football, the Steelers increased that output by rushing for 104 yards and two touchdowns on 22 carries. It’s still not quite good enough overall, especially in comparison to the rushing attacks of the Patriots and Browns, but improvement is just that — improvement.

Speaking with reporters Tuesday during his weekly media availability, Steelers head coach Mike Tomlin stated that he’s continually encouraged by the Steelers run game overall, thanks to guys like Najee Harris and Jaylen Warren, not to mention an offensive line that has been a quiet bright spot for the Steelers offense through three weeks.

“I’m continually encouraged,” Tomlin stated to reporters, according to video via the Steelers’ official YouTube page. “I think we’ve talked, whether it’s components of it, whether it’s individuals like Jaylen Warren carving out a role for himself or whether it’s about groups within the group, like the emergence of the offensive line has been continually better with each and every performance.

“I just think in all areas of it are pointing toward improvement, and that’s why we gotta keep our head down and keep working and, ultimately, get results in stadium.”

The results in the stadium is what matters most, and right now the Steelers aren’t getting those results, period. When the Steelers have needed it the most, the run game hasn’t quite shown up to provide that balance and keep the defense off balance, allowing the Steelers offense to stay on the field and sustain drives.

That said, it’s pretty encouraging to see Najee Harris and Jaylen Warren get going in recent weeks, and the offensive line, which was absolutely crucified and buried in the offseason, playing rather well early in the season from a pass blocking and run blocking perspective.