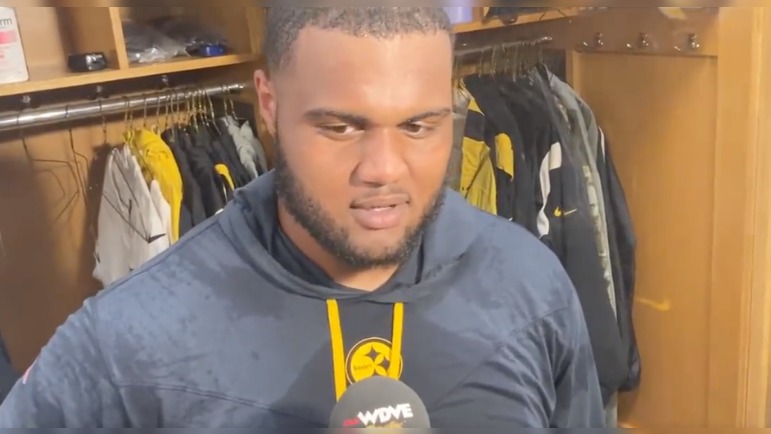 While Cleveland Browns DE Jadeveon Clowney has been ruled out of Thursday night’s matchup with the Pittsburgh Steelers due to an ankle injury, All-Pro Myles Garrett still looks to take the field in the primetime matchup should he be good to go after dealing with a neck issue this week.

Should Garrett suit up Thursday, he will get the privilege of lining up across from LT Dan Moore Jr. who saw play of Garrett as a rookie last season. In their first matchup in 2021, Garrett was beaten eight times and allowed three hurries and one sack on 36 pass-blocking snaps. He allowed pressure on 13.9% of his snaps to finish with a 0.0 pass-blocking grade according to Pro Football Focus. However, he showed notable improvement in his second meeting with Garrett, allowing zero sacks, one hurry, two QB hits, and three total pressures and finished with a pass-blocking grade of 44.3 according to PFF.

Empty set, no blitz threat. Don't know why you would slide away from Myles Garrett's side. Probably didn't make a difference but Moore gets beat on failed 2-point try. #Steelers pic.twitter.com/Yg8biOnNaP

When asked about if he’s thinking about his matchup with Garrett this Thursday and how he plans to handle to dynamic edge rusher, Moore chose to address the topic with the mindset that he must control what he can control rather than worrying about the opposition.

“Na man, you can’t think about it like that,” Moore said to the media in the locker room Tuesday on video from Chris Adamski’s Twitter page. “Think about it like it’s me versus me. It’s me executing my technique against them.”

You can see where Moore is coming from when taking the “me versus me” approach rather than addressing his upcoming battle with Myles Garrett. He could go on worrying about how he plans to slow down such a dominant player, but that would only get to his head and likely affect his performance. Instead, he wants to dial in on his technique and execute at a high level, hoping that will be enough to at least slow down one of the best pass rushers in the NFL.

Garrett made Moore look like a fourth-round rookie at times last season, so expecting him to clamp down and shut out a player of Garrett’s caliber is wishful thinking. However, if he can slow Garrett down and limit his impact on the game, that could go a long way in Pittsburgh getting the edge in their matchup with the Browns.

Dan Moore Jr. has had his fair share of uneven play to start his NFL career, leaving many to wonder if he can be Pittsburgh’s future at LT. However, when he was asked if this could be a statement game for him and his prospects compared to other tackles in the league, Moore said he looks at every game as a chance to prove himself.

“I think that’s every game,” Moore answered when asked if this is the game that he can make a name for himself. “I mean there’s good players on every team, obviously Myles [Garrett] being one of the best players in the league. But I don’t look at it like that. I look at it like it’s an opportunity. I wouldn’t say it’s making a name for myself.”