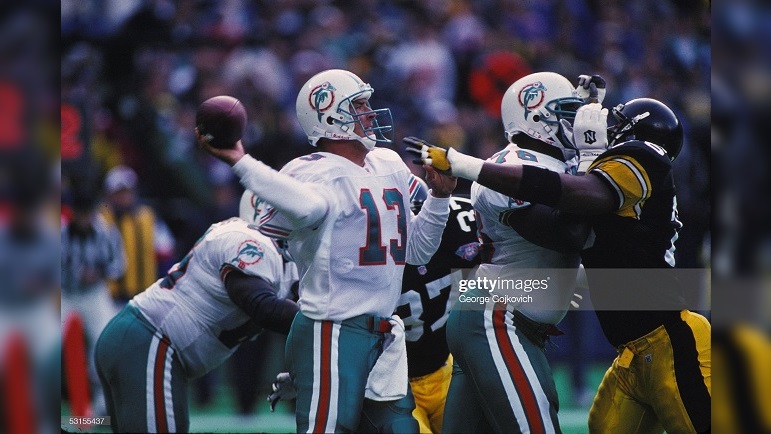 After bypassing a chance to select quarterback Dan Marino in the 1983 NFL Draft, fans of the Pittsburgh Steelers have wondered ever since what may have happened had the University of Pittsburgh product wound up playing in the black and gold. While Marino did go on to spend his entire NFL career with the Miami Dolphins, he recently stated in an interview with USA Today that he considered continuing playing in 2000 following him voiding the final two years of his then-current contract that February.

“I definitely thought about it, to be honest with you,” Marino said in the interview. “I played 17 years for the Dolphins, and they were kind of going in new direction and a new coach and I had offers to go play other places and really thought about it and maybe would have had a chance to maybe to win a championship like Matthew [Stafford] has done and other guys are trying to do in other places. And it just didn’t. You know, after I thought about it for a long time, it just didn’t feel right. Like, so I just decided I’ll just be a Dolphin for life, and it’s worked out great. But I will tell you that I did think about that, yes.”

Marino went on to say that he had received serious interest from two teams that offseason with the Steelers being one of them and that he gave some thought to returning to Pittsburgh to play a couple of more seasons.

“Minnesota was interested in me for what would have been my 18th season,” Marino said during his interview. “The Pittsburgh Steelers talked to me. Those two were the main teams. Maybe go home and play for the Steelers for a couple of years, but it was one of those things where I’d already put my heart and soul into Miami, so I just figured it was time [to retire].”

Marino’s comments in that interview shouldn’t come as a shock as there were rumors back in 2000 that the Steelers were indeed interested in signing him after he voided his contract with the Dolphins.

In 2000, the Steelers had hired Kevin Colbert to be their new Director of Football Operations after moving on from Tom Donahoe. Also at that time, the Steelers were coming off a 6-10 1999 season and looking to possibly find a replacement for starting quarterback Kordell Stewart.

The Steelers’ courtship of Marino probably didn’t last very long, however, as the team signed journeyman quarterback Kent Graham to a three-year, $5.1 million contract on February 28, 2000. It was rumored ahead of the signing of Graham that Marino would have had to take a sizable pay cut if he were to sign with the Steelers.

After settling on Graham, the Steelers took four quarterbacks to training camp that summer with Stewart, Tee Martin and Anthony Wright also comprising the depth chart. Graham ultimately was named the team’s 2000 starter and that initially lasted all of three games as he completed just 48 of 98 passes for 625 with no touchdowns and no interceptions as the team got off to an 0-3 start.

Graham would go on to start two more games for the Steelers in the middle of that season and while the team won both of them, it was mainly due to their defense pitching back-to-back shutouts. Graham was 16 of 45 for 219 yards with one touchdown and no interceptions in those two starts. He would go on to attempt just five more passes the remainder of the season as Stewart was essentially the team’s starter from Week 9 and on.

With the defense that the Steelers had in 2000, it does leave one to wonder what the team could have done had Marino been signed earlier that offseason. They went 9-7 that season and finished third in the AFC Central division and obviously missed the playoffs.

After the 2000 season, the Steelers quickly moved on from Graham in lieu of signing Tommy Maddox. The 2001 season saw a resurgence of Stewart, however, as he led the team to a 13-3 record and ultimately one game away from the Super Bowl.