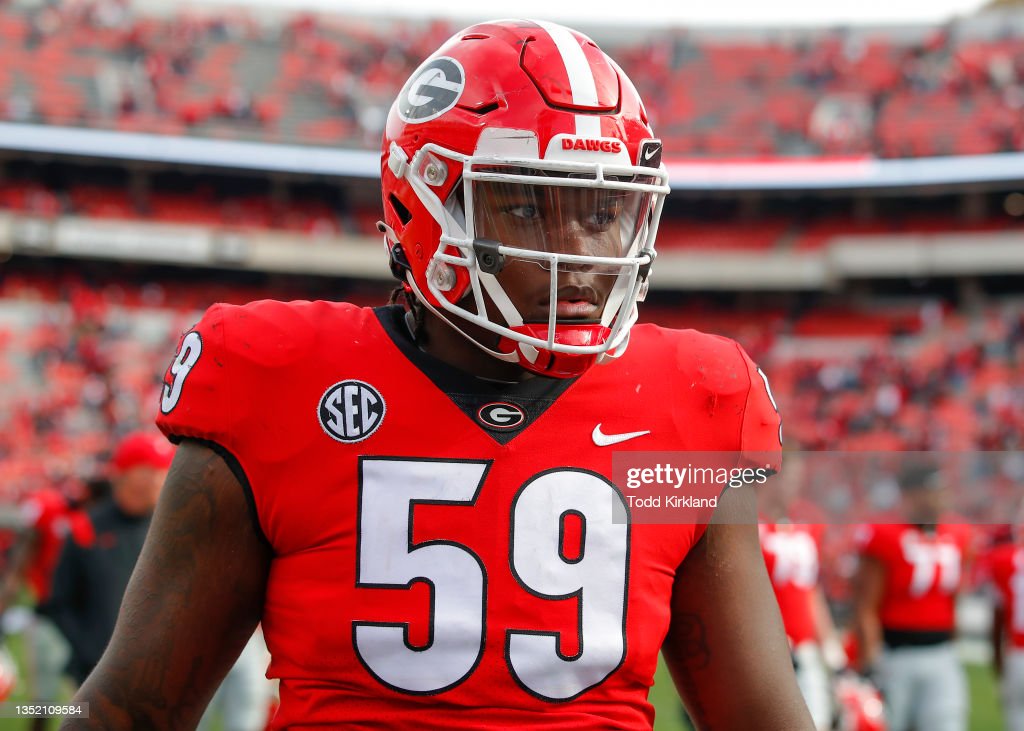 Based off the way the new-look offensive line has performed throughout training camp and the preseason for the Pittsburgh Steelers, there’s a good chance that the position group — whether that’s tackle, guard or center — will be addressed early (and often) in the 2023 NFL Draft under first-year GM Omar Khan and first-year assistant GM Andy Weidl.

Good news for the Steelers is that it appears to be a solid class coming up in the trenches, at least on paper.

According to CBS Sports’ Josh Edwards, there’s one name that stands above the rest for the Steelers in the draft class, one that they should be paying close attention to throughout the 2022 college football season from a scouting standpoint.

That player? Georgia Bulldogs left tackle Broderick Jones, a player Steeler Nation should be familiar with, thanks to the summer scouting series from Steelers Depot’s Jonathan Heitritter.

After selecting quarterback Kenny Pickett in the first round, getting him a pair of young weapons in receivers George Pickens and Calvin Austin III, and putting him with young skill talent in Diontae Johnson, Chase Claypool, Najee Harris and Pat Freiermuth on an offense that seemingly has a bright future at the skill positions, the Steelers desperately need to turn their attention to the offensive line once again.

Jones could be the first step in the right direction for the black and gold in the trenches on the offensive side of the football, according to Edwards, who highlighted the Bulldogs’ left tackle as the name to focus on for the Steelers this season.

“Pittsburgh made the investment in rookie quarterback Kenny Pickett but the young player needs to be supported. There are plenty of examples where a franchise has not protected a young quarterback and it negatively alters the course of that player’s career. The offensive line needs to be upgraded,” Edwards writes regarding Jones and the Steelers for CBSSports.com. “The Steelers are historically known as being physical but offensive coordinator Matt Canada’s scheme also relies on motion. Jones is a raw talent with the size and speed to excel in the city of iron. He has work to do in order to maximize his draft stock next April but the possibility exists.”

The Steelers threw some money around in free agency, bringing in veterans Mason Cole and James Daniels as outside free agents, while also retaining Chukwuma Okorafor on the open market. Those moves came one year after the Steelers spent a third-round pick on Kendrick Green, and a fourth-round pick on Dan Moore Jr., neither of which has truly worked out like the Steelers had hoped.

That turns the attention to a guy like Jones in a solid offensive tackle draft class, also featuring the likes of Northwestern’s Peter Skoronski and Ohio State’s Paris Johnson Jr.

Heitritter seems to believe in Jones’ abilities, even if he is a raw player overall at this point in his career.

“Overall, Broderick Jones is a raw, yet talented offensive tackle prospect that came on strong last season for the Bulldogs, helping them dominate on the ground en-route to a National Championship. He is a well-accomplished run blocker that looks to enforce his will on his opponent with physicality and an aggressive style of play. His athleticism and movement skills remind me personally of another redshirt sophomore who just got drafted in Charles Cross.”

The Steelers could use some added physicality up front in the trenches, especially in the run game, if they’re going to continue to lean heavily on second-year running back Najee Harris on the ground. Part of aiming to be a run-heavy team is having an offensive line capable of running the football at a high level and a consistent rate.

Adding talented pieces with premium picks could go a long way towards addressing some of the deficiencies on the offensive line.