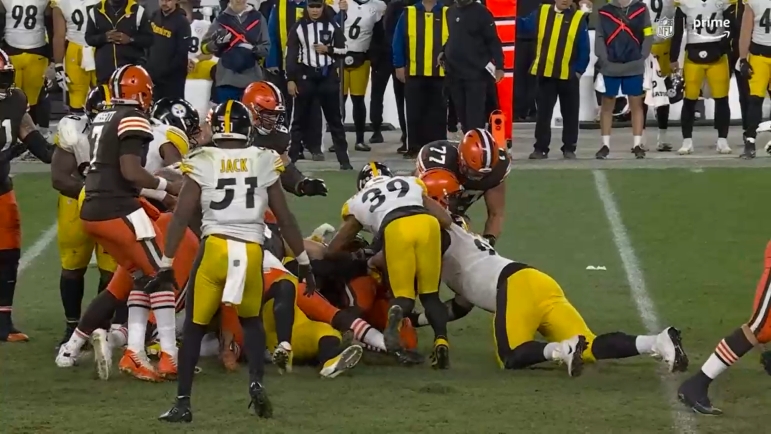 The Pittsburgh Steelers defense has played 231 snaps thus far, by far the most in the league. Of course that’s because they are one of only two teams to play three games thus far, in addition to an overtime period, but note that the Cleveland Browns’ defense has only logged 172 snaps in comparison.

Why is that? Well, the offense having a high three-and-out percentage and few sustained drives certainly doesn’t help matters, but it would draw even if the defense were giving the opposing offense the same treatment. They’re not. Especially on situational downs.

“I do think we’re playing too many snaps, but I don’t think that’s [anybody’s] fault but ourselves”, defensive captain Cameron Heyward said on Friday on his Not Just Football podcast, the day after the loss as he tried to process it.

The Steelers are actually allowing third downs to be converted at a rate of 47 percent, which ranks as the eighth-worst mark in the league heading into the full Week 3 slate, but it’s even worse if you factor in their 4-for-7 record on fourth down. In that light, they have allowed 27 out of 49 drives to continue through those crucial money downs—which is a rate of 55 percent.

Now, on the flip side, the offense is only converting on third down 33 percent of the time, currently sitting at 13-for-39—they are the only team in the entire league that has not get attempted a fourth-down conversion, despite having valid opportunities to attempt them.

The offense deserves plenty of blame for the Steelers’ 1-2 start; certainly nobody will dispute that. But the defense, deservedly, has been taking as much of the blame as it can. I haven’t seen anybody on the defensive side of the ball trying to make excuses. When they say they’re tired or playing too many snaps, they say it’s because they’re not getting off the field.

And as I said, that’s for good reason. They are averaging opposing drives allowed of seven plays spanning 34.7 yards and taking up 3:28 minutes of game time. Those numbers rank 29th, 22nd, and 27th, respectively. None of that has to do with the offense, or at least very little.

Their biggest saving grace, for now, is that they are still largely keeping the score down. They do rank 15th in points allowed per drives, despite their opponents owning the fourth-best average starting field position on their possessions.