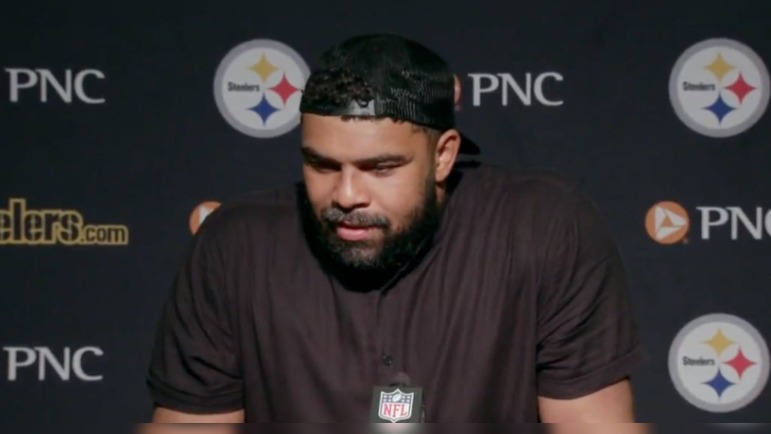 The Pittsburgh Steelers won in thrilling fashion against their division rival Cincinnati Bengals 23-20 thanks to a Chris Boswell field goal that went through the uprights as time expired. The defense came to play in this one, sacking Joe Burrow seven time and forced five turnovers, one of which was an interception return TD by S Minkah Fitzpatrick. Defensive captain Cam Heyward particularly had a strong performance in this one, finishing the game with two tackles, one TFL, a sack, three QB hits, and a fumble recovery off a strip-sack by Alex Highsmith on Joe Burrow.

Heyward spoke the media following the game in a postgame press conference and was asked about how the defense overcame adversity at the end of the game with several players getting injured and calls from the referees not going their way.

“On defense especially, you know Mike T doesn’t give us a chance to really even think about that,” Heyward said to the media in the post-game press conference which aired live on the team’s YouTube channel. “If you’ve been at one of our practices, like the defense doesn’t get a call to save your life. So, it’s nothing new. You’re in a hostile environment. We don’t play for the calls. We play through ’em. That’s the ebb and flow of a game. You’re not going to get every single call, but how you battle back, and we needed 60-plus to get this done.”

The Steelers were called for eight penalties resulting in 59 yards. They also lost T.J. Watt to a potentially torn pec along with having Levi Wallace, DeMarvin Leal, Alex Highsmith, and even Heyward leave the game. The Steelers got called for an unnecessary roughness in the end zone which gave Cincinnati a new set of downs in the red zone, which they capitalized on with Burrow connecting with Ja’Marr Chase on a TD with seconds left on the clock.

JA'MARR CHASE WHO ELSE? 🔥

However, Fitzpatrick blocked the extra point attempt and Pittsburgh continued to battle into overtime, experiencing a wild exchange of missed field goals before Boswell got a second crack at it and nailed the 53-yard game-winner.

The Steelers had to overcome adversity this Sunday in a hostile environment against their archrival. The defense particularly had to weather the storm as they did most of the heavy lifting on the afternoon as the offense sputtered, keeping Burrow and the Bengals offense contained for the first half until the tide started to turn. However, like Heyward said, the defense is used to being put in disadvantageous positions thanks to Tomlin putting pressure on them in practice settings to overcome and rise to the occasion like they did today.

Despite losing the reigning Defensive Player of the Year to injury and having several key calls go the other way in the waning moments of the game, the Steelers managed to come out of the game the victors. They definitely have to clean numerous things up on both sides of the football prior to their Week 2 matchup at home against the Patriots, but they managed to battle back and win a game very few pegged them to get on the road, to go to 1-0 and take a lead in the division over the reigning AFC champions.

Cam Heyward on our win over the Bengals ⬇️ pic.twitter.com/WnnCUKHvE2