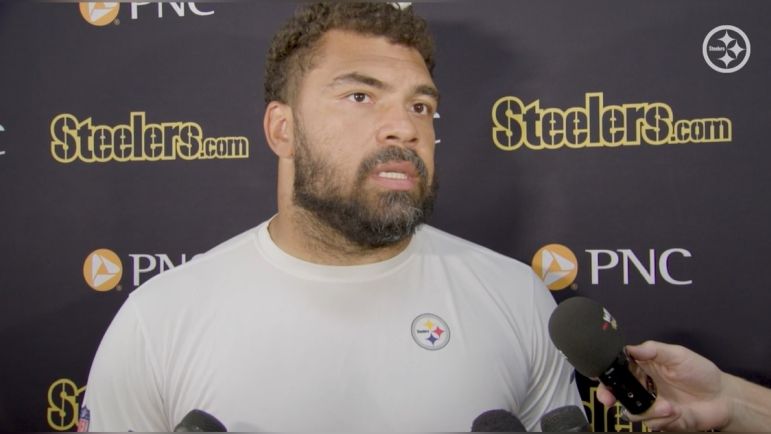 If the Pittsburgh Steelers want to right the ship and get back to their winning ways, they’ll have to contain the Cleveland Browns’ potent run game. Speaking to the media today, Cam Heyward explained how to stop the Browns favorite style of runs – their zone scheme.

“First, it’s everybody’s staying in their gap,” Heyward told reporters via Steelers.com. “A lot of times a guy can get reached and put everybody at risk because he’s not in his gap. The C and D areas like I mentioned before really become critical because as they get stretched, you can either get upfield and create a vertical seam or you can get pushed back and then they continue to run the edge and then they get upfield.”

The Browns pair their inside zone with an outside/wide zone. Conceptually, it’s similar, the offensive line all on one track flowing down the line with the back picking the lane based on how the defense flows. There is no designated hole for the back to hit. The scheme relies on the runner’s vision to “make the offense right” by finding where the defense isn’t. The difference between inside versus outside zone is the aiming point of the back. Usually the hip of the guard in inside zone, the hip or butt of the tight end in outside zone. Regardless, the Steelers’ front, really their whole defense, must do its job.

“It could be just a front seven problem but it’s an 11 man group problem, and guys gotta make sure they stay in their gaps and make sure they play with good extension to get off blocks.’

Aa Heyward mentioned, staying in your gap and getting vision on the ball is critical. The more the back is forced to run to the perimeter, the more a defense can string out a run, the better off defensive front will be. The worst thing a defense can do is have a breakdown that allows the back to cut and vertical. And the Browns have a pair of good ones in Kareem Hunt and Nick Chubb. Through two weeks, no team has run for as many yards as the Browns at just over 200 per game, recording 217 in Week One and 184 in Week Two. Pittsburgh held their own in two meetings last year but all it takes is one breakdown, one error, and a guy like Chubb or Hunt can make a house call.

The Steelers own running game will try to get on track after slogging their way through the first two weeks. They’ll need to do what they did in the last meeting when Najee Harris and the Steelers ran for 190 yards, holding the Browns to just 93. Harris capped off the game and the win with a 37-yard touchdown, sending Ben Roethlisberger home a winner in his final home game.