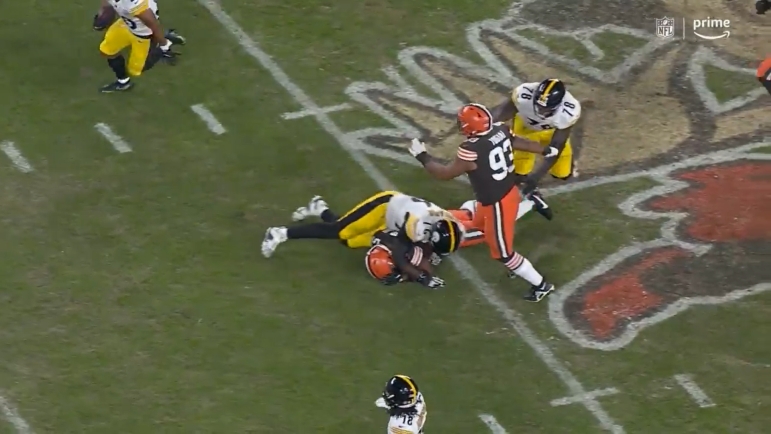 There has never been an injury taken place on a football field that generated a positive reaction from me. I don’t care who the teams are or who the player is. I hate to see people get injured. Now, I’m not a stranger to appreciating a big hit and seeing a guy get hurt—that is, he’ll be sore for the next week.

Every injury is unfortunate, and I wish they could all be avoided entirely. But an injury occurring on a play does not affect the legality or intentions of the play itself. And so on these grounds, I have to call bullshit on the reaction from Cleveland Browns players yesterday to their teammate, Anthony Walker Jr.’s, season-ending injury suffered while engaged with Pittsburgh Steelers right tackle Chukwuma Okorafor.

You already know the background so I’m not going to get into it here. You can read what Myles Garrett (of all people), Wyatt Teller, and others had to say about it here. But I especially take issue with Teller, which I’ll get into, but that also ties into the first point I want to make, which is this:

It’s common knowledge that linemen continue their blocks through to the ground against fallen defenders. And Browns cornerback Greg Newsome II proves it. Quoted by Browns beat writer Mary Kay Cabot, he told Cleveland.com of Okorafor’s follow-through block, “I feel like that’s just something O-linemen do in the NFL, you get pancaked, they’ll jump on you or something like that. I feel like I’ve seen it before”.

No kidding you’ve seen it before. You’ve undoubtedly seen Wyatt Teller do it dozens of times by now. That’s why his comment in particular is so galling because at some level he has to know that it’s bullshit since he and his fellow linemen do it themselves. He has to know that he would have done the same thing after blocking a linebacker to the ground—indeed would have been instructed to do so.

Because it’s a block. I repeat, it’s a block. It’s a block. Watch any cutup of Alejandro Villanueva’s hand chop and you’ll see him repeatedly following through after knocking a player to the ground in order to lie on him.

Because you still have to take him out of the play. Imagine if linemen had to courteously wait for a defender to get back up off the ground after knocking them down and then try to block them all over again almost as if it’s a fresh down. It’s absurd on the face of it.

Yes, it’s on the player’s back, but if the player’s front is touching grass and all you have is the back, you’re permitted to block what’s presented to you. And because Walker was injured and couldn’t get up, all Okorafor had to block was his back.

And that brings us back to the start: that the result of the play does not change the nature of the play. It’s highly unfortunate that Walker was injured. But that doesn’t make the block a “bullshit play”, nor does it make it dirty, mean-spirited, or not in keeping with any kind of unspoken bond of brotherhood with other players. He was simply playing.

What these players are doing is reacting to the result of the play. If Walker hadn’t injured his quad—and his quad being injured had almost literally nothing to do with the actual mechanics of the manner in which Okorafor blocked him—nobody would have even reacted to the play in the first place.

And here’s the thing: Teller himself even said that Okorafor’s initial block was “a good block” and that he “was doing great”. But then he goes on to imply that Okorafor was trying to hurt Walker while he was on the ground, that the lineman was “angry”, and even claims that if he were in that situation, he would have realized that the player was hurt.

The idea that you could ascertain that a player you hit on the upper body suffered a quad injury that quickly is not realistic at all, to put it generously. And it gets even more ridiculous because, apparently within the same stream of thought, Teller even admitted that he didn’t think Okorafor likely knew Walker was hurt by the time he went to the ground. So what are you even talking about?

Respectfully, guys, listen to Greg. At least one of you is thinking with your brain. And this isn’t about the Steelers. It isn’t about the Browns. It’s just about what makes sense. Walker getting hurt doesn’t make Okorafor’s actions worse. Mr. Newsome proves that you can still be realistic while talking about something that happened to a teammate.