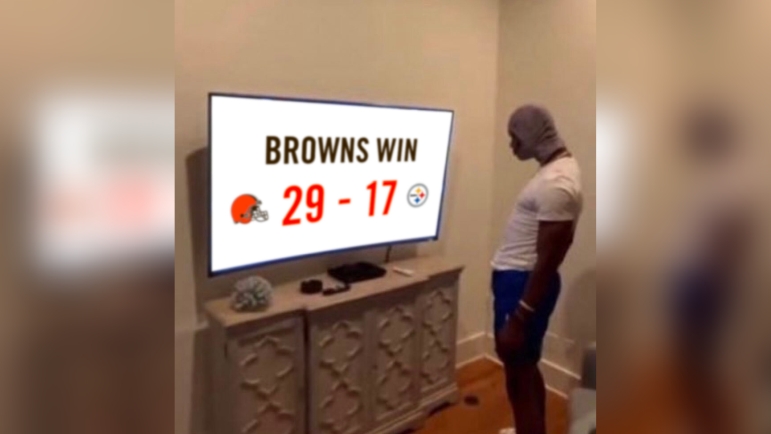 The Cleveland Browns could easily be 3-0 right now had they not had a most improbably collapse on Sunday in the final two minutes of the game. As it is, they are 2-1 and currently have control of the AFC North after defeating the Pittsburgh Steelers last night.

And they had their fun with it after the game, poking fun at the Steelers, and specifically their potential star rookie wide receiver, George Pickens, who became meme-ified long before he ever played a snap in the NFL, the image of him watching himself get drafted quickly going viral.

After making spectacular catches routinely during training camp, Pickens had the opportunity to make one such catch for his first career touchdown in the Steelers’ preseason opener. The NFL even got on board, photoshopping a highlight of the catch onto the television screen of the original meme, having the receiver watching himself score, and they made that their banner on Twitter.

Well, perhaps the Browns weren’t so impressed with the instant star status given to the rookie. After the game, they shared the meme as well, only this time modified to show Pickens staring at the final score, his Steelers in a losing effort.

back in the W column pic.twitter.com/91VrwwUtKO

For his part, Pickens did have the chance to make another spectacular catch, a 36-yard grab, on the night, but he still only has five catches on the season. Two have been excellent, the other three have been unworthy of comment.

Quarterback Mitch Trubisky did target him seven times last night, after acknowledging on Sunday, for the second week in a row, that they needed to get him involved more. Targeting him more is a start, but they also need to get him better chances and put him in position to make plays, because he has shown that he can make some incredible catches.

He did get one shot in the end zone, but it was a rather high pass and quite possibly uncatchable without making a truly stupendous play. But he did attempt to one-hand it rather than making an effort to try to go up with both arms outstretched, and he seemed to get a quick lesson from wide receivers coach Frisman Jackson about that afterward. The one-handed attempt resulted in him tipping the ball up, and it would have gone for an interception had the defender who caught the ball only not first stepped out of bounds.

Thus far this season, the Steelers’ passing game has run heavily through Pro Bowl wide receiver Diontae Johnson, as should be no surprise, but they need to do a better job of getting others involved. That’s not just Pickens, but also Chase Claypool and Pat Freiermuth and even Najee Harris.