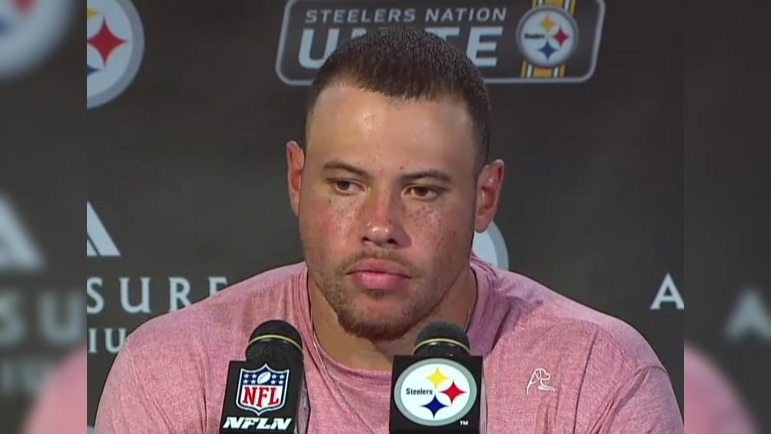 The Pittsburgh Steelers lost to the New England Patriots 17-14 Sunday afternoon at Acrisure Stadium in what would best be described as an ugly slugfest. The offense again looked out of sync for most of the contest and the defense struggled to effectively put pressure on Mac Jones with four rushers without T.J. Watt out there.

While the Steelers’ defense did well at stifling the run game early in the game, the Patriots got into a rhythm in the final moments, ripping off big runs on first and second down to set the offense up with third-and-short conversion attempts.

OLB Alex Highsmith was asked following the game if New England’s success on first and second down limited their ability to pin their ears back and rush the QB on third down, Highsmith agreed that the opposing offense’s early down success prevented the defense from effectively getting off the field and getting the ball back to the offense.

“That was kind of the key to this game, and we just got to do that better next game and from here on out because third-and-ten against our defense is a lot harder than third-and-three,” Highsmith responded to the media in the post-game press conference which aired live on the team’s YouTube channel. “And so, we just got to sit down on the run and just really be better on first and second down as a whole so that we can get them in those long distances.”

The Patriots picked up 18 first downs and converted 9-of-17 third down attempts on the game against Pittsburgh’s defense. They particularly came up strong down the stretch, having the combination of Rhamondre Stevenson and Damien Harris bludgeon the Pittsburgh run defense in the final half of the fourth quarter on a 13-play drive that ate up 6:33 of clock, effectively ending the game.

Pittsburgh got the game within three after a TD to Pat Freiermuth and a two-point conversion to Diontae Johnson late in the third quarter, but had two three-and-outs after that scoring drive, failing to get the ball again with a chance to tie or take the lead. The offense didn’t do the defense any favors in this one, but Highsmith and the defense fully understand that they will be called upon to make the plays necessary to give the offense a chance at victory. After doing just that last week, they couldn’t come up big against the Patriots and now look to rebound on a quick week against the Cleveland Browns Thursday night.