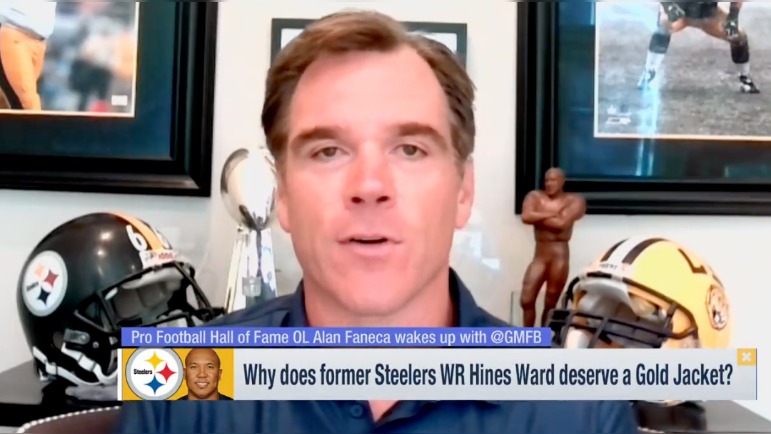 On Wednesday morning, former Steelers OG and Hall of Famer Alan Faneca joined the crew on GMFB, which aired on NFL Network, to talk about Pittsburgh’s current QB situation as well as other topics concerning the team.

Later in the segment, Faneca stepped up to the plate to vouch for his presenter for the Pro Football Hall of Fame to get the nod himself in the near future. That player being none other than WR Hines Ward.

"There were rules made for him. @mvp86hinesward changed the game."

Will the legendary @steelers WR join @afan66 in the @ProFootballHOF? pic.twitter.com/WS3Ef9NgGe

“Rules were made for him,” Faneca said regarding Ward’s candidacy for the Pro Football Hall of Fame on GMFB. “Wide receivers are not allowed to do what Hines did because of him. He changed the game.”

Ward did change the game for the physicality he brought to the WR position, particularly as a blocker. The NFL implemented the “Hines Ward Rule” to make the blindside block illegal if the block came from the blocker’s helmet, forearm or shoulder and lands to the head or neck area of a defender. The rule came into existence after Ward laid this bone-crushing hit (literately), breaking LB Keith Rivers’ jawbone and ending his season. Ward was well-known for his physical blocking on the outside against opposing defenses, and was subsequently named the dirtiest player in the NFL in 2009 as a result.

This hit led to the "Hines Ward Rule" which made blindside blocks to the head/neck area of defenders illegal. pic.twitter.com/HMJJwt2Mng

Faneca also pointed out that Ward was a fan favorite that people went out of their way to tune in to watch on Sundays and would have had better stats on his career if he didn’t play in Pittsburgh’s run-heavy offensive system. Both of those points carry some weight as Ward was known for his charisma and personality, having a smile that lit up the room. He also managed to post 1,000 receptions for 12,083 yards and 85 TDs over the course of his 14-year NFL career. He was named a four-time Pro Bowler and played in three Super Bowls, winning two.

Ultimately, Hines Ward was the consummate professional and represented what a Pittsburgh Steeler should be in terms of grit, character, and selflessness to do what is best for the team. He may or may not end up in Canton one day, but based on Faneca’s experience of his former teammate, there isn’t another player more deserving of consideration based off the intangibles than Ward for the Hall of Fame.

“He put team-first and was selfless and went out there and did what he was asked to do,” Faneca continued regarding Ward. “That was to play wide receiver and to block and to be a big package of the entire game, not just catching the ball down the field and having eight catches a game. He played the entire 60 plays every game.”