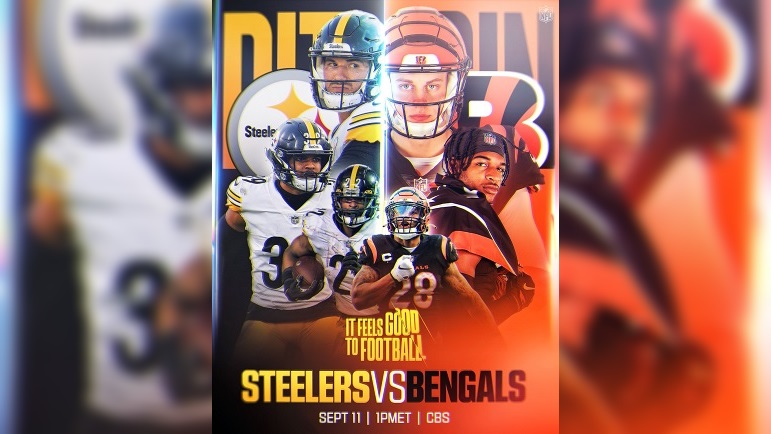 NFL Football and the Pittsburgh Steelers are back! Thank you for joining us on Steelers Depot during the best time of the year. If you are joining us on the game thread for the first time, I will be curating tweets, interesting stats and more throughout the game, so be sure to refresh the page throughout the game. If you scroll all the way to the bottom of the page you will find the comment section where fans gather to discuss the game in real-time.

The Steelers are of course on the road in Cincinnati to take on the defending AFC Champions. They fell short in the Super Bowl against the Los Angeles Rams, but the team is better on paper returning many of their pieces and adding players via free agency and the draft to bolster their weak points from last season. The biggest overhaul was on their offensive line where they brought in a myriad of free agents, but can they all gel together this early in the season?

On the other hand, the Steelers have their own set of offensive line issues with a new face behind the line at quarterback. Mitch Trubisky is starting the season and according to reports from Ian Rapoport, the leash will be very long for Trubisky in 2022. The reported plan is for Trubisky to play this entire season before Kenny Pickett takes over in 2023. Of course, the aforementioned offensive line issues could throw a wrench in that plan on any given snap – probably the reason the Steelers are hanging on to Mason Rudolph as the 3rd stringer.

The #Steelers QB1 is in the building. pic.twitter.com/B8b9S0ST6f

Mitch Trubisky Will Have ‘A Long Leash’ As Starting QB According To Ian Rapoport https://t.co/TrR04bQZHA #Steelers pic.twitter.com/DVOToS8lml

Props to rookie DeMarvin Leal in getting a Week 1 helmet as part of the Steelers dressing six defensive linemen in total. #Steelers #NFL

Pretty interesting that Leal was already able to get a helmet over Isaiahh Loudermilk. The Steelers defensive line is DEEP.

Gunner Olszewski back for the Steelers, but it resulted in a touchback.

On first down, a shovel pass to Pat Freiermuth for about 3. A five yard gain on 2nd to Chase Claypool. Diontae Johnson nearly picked up the 1st, but it was ruled short. Mike Tomlin throwing the red flag early. This would be a large bummer to go three-and-out, but it looks like Diontae’s final effort to get the first may have been enough.

The refs determined there wasn’t enough evidence to overturn. Pressley Harvin’s punt was caught at the 22 yard line. The first defensive play and Cameron Heyward penetrated into the backfield for the quick sack. 2nd and 15, Joe Burrow’s pass was undercut by Minkah Fitzpatrick. Returned for a touchdown! 7-0 Steelers.

TJ Watt was holding his knee a bit at the end of the play. Hopefully its just sore from that cut block a couple weeks ago.

The Steelers defense, back on the field again, got the Bengals into 3rd and long, but Hayden Hurst was able to fight his way for the conversion.

On 1st, Tee Higgins across the field for 18 yards. The Bengals are now in Pittsburgh territory.

On 2nd down, TJ Watt elevated and deflected the pass into the air. If Ahkello Witherspoon would have got there, it may have been another pick-six. Alex Highsmith killed the drive with a big sack on 3rd down. The Bengals hit a 59 yard field goal. 7-3 Steelers.

Starting at their own 25 yard line, Chase Claypool with the end around for a gain of just two yards. 2nd and 8, Najee Harris for another three yards. 3rd and 5, Trubisky attempted one deep to Miles Boykin, but he couldn’t quite get under it. Another three and out for the Steelers offense.

The Harvin punt went to the 29 yard line returned to the 35.

False start called on the Bengals, so 1st and 15 from the 30 yard line. Mixon ran for 5 on first down, so 2nd and 10. Burrow making adjustments before the play. Mixon took the handoff tackled by Larry Ogunjobi for another 5 yard gain. Cameron Sutton called for pass interference to negate his interception on 3rd down. Probably should have been defensive holding, but similar result.

Alex Highsmith with his second sack on the day, this time a strip sack recovered by Cameron Heyward.

Not sure if they will rule than an interception or a fumble, but still great play for the Steelers.

On 1st down, a lot of motion and a bit of tricky play resulted in a 31 yard pass to Pat Freiermuth.

The Steelers got stuffed on the goal line three straight times, the last play being a slightly high throw to Freiermuth. The Chris Boswell field goal was good. 10-3 Steelers.

Ja’Marr Chase lined up against Ahkello Witherspoon and he caught the pass at the line of scrimmage and ran for about 11 yards.

The Steelers got the Bengals into 3rd and 2, but Witherspoon was beat on the dig by Chase once again.

TJ Watt darted into the backfield on 1st down. He nearly received the handoff, but tackled Joe Mixon in the backfield for a modest loss. The next play, TJ Watt got up in the air and intercepted the ball at the line of scrimmage. The Steelers defense is dominating this supposed high powered offense.

Jaylen Warren in on 1st down and he ran for just two. The next play, Chase Claypool end around for 16 yards.

Zach Gentry received a TE screen for 32 yards on 1st down. The Steelers have their second red zone attempt.

On 1st down, Najee Harris picked up about three yards.  2nd and goal from the 7 yard line, Chase Claypool made a tough catch for 4 yards. 3rd and goal, defensive pass interference called with George Pickens the target in the end zone.

A fresh set of downs, Chase Claypool stuffed at the line of scrimmage by Trey Hendrickson. Najee Harris caught the swing pass for the touchdown. 17-3 Steelers.

The Steelers take a two-touchdown lead in Cincinnati with this Trubisky to Najee score 👀 pic.twitter.com/4ynDGasYvV

Minkah Fitzpatrick made the tackle on 1st down, limiting Mixon to just two yards. Burrow nearly got sacked and evaded pressure. He hit Tee Higgins caught the pass for a first down, but he got his bell rung on the play.

1st and 10, Joe Mixon rushed for about three or four yards. Another two yards on 2nd down, so 3rd and 4. Burrow hit Ja’Marr chase on the sideline. Cameron Sutton intercepted his 2nd pass of the day. The last one was negated by penalty. Another flag out on the field. MInkah called for personal foul, but enforced after the play.

That is four turnovers for the Steelers today!

Joe Burrow in the 1st half so far 😬

The Steelers offense, deep in their own territory, couldn’t get anything going. Jaylen Warren’s drop in the flats put them behind the chains and they went three-and-out.

The punt set the Bengals up at the 35 yard line. Ja’Marr Chase picked up a big gain to get into Pittsburgh territory.

Joe Mixon stuffed on 1st and 2nd down to set up 3rd and 6. Larry Ogunjobi coming off the field for the obvious passing down which is interesting.

On 3rd and 6, Joe Burrow complete to Mike Thomas, tackled by Levi Wallace a yard short of the line to gain. The Bengals have a decision here. An easy field goal for their kicker. Looks like the offense is staying on the field. On 4th and 1, Joe Mixon found a hole and ran 31 yards. Minkah Fitzpatrick saved the touchdown, but the Bengals are in great position with plenty of time.

On 1st and goal from the 4 yard line, Mixon stuffed for about a half yard gain. A false start on the offense, so 2nd and goal. The Bengals called a timeout to prevent the 10 second runoff. 2nd and goal from the 8 and an incomplete pass in the back corner of the end zone. 3rd and goal, incomplete pass with Levi Wallace pushing Ja’Marr Chase out of the end zone. Only one foot down. The field goal is good. 17-6 Steelers.