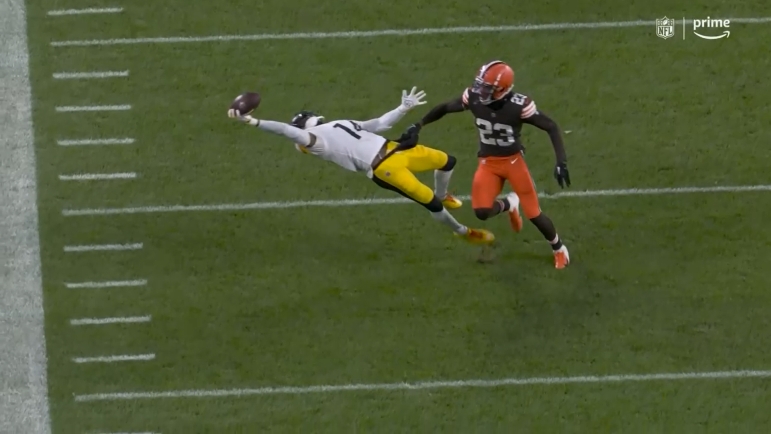 Reasoning: Although he only made one truly notable play during the Steelers’ Thursday night game against the Cleveland Browns, it was a truly singular and spectacular one that has once again put him on the map—and likely secured assurances that he will more regularly see a healthy share of targets moving forward.

I don’t think I really have to spend much time talking about ‘the catch’, right? I mean, the NFL has it up as its Twitter banner right now, framed like a painting (which, once again, the Browns have chosen to be petty about, but such is the right of the victor).

The 36-yard grab late in the first quarter has been compared to ‘the catch’ made by Odell Beckham Jr. years ago (which safety Terrell Edmunds yesterday described as occurring “back in the day”, thus making me feel suddenly incredibly old).

Any number of accolades can be heaped upon that one reception. But of course Pickens is going to have to make more than one play. He has two excellent catches to date on the season, but his other three receptions have been wholly inconsequential, and they have come on 13 targets.

One of the seven targets he faced yesterday was a shot into the end zone, which he attempted to high-point with another one-handed stab. Although I don’t know if he could have reasonably hauled it in with two hands, the effort nevertheless failed and was caught by the nearest defender, saved from being an interception only due to the fact that he had first stepped out of bounds.

Pickens has admitted to some frustrations with his lack of production in the early stages of his career, and we have even begun to see some hints of that manifest on the sidelines, but I think it’s only a matter of time, not only before we see him more conscientiously woven into the fabric of the offense, but also before we see that consistent production emerge.

Even Pickens acknowledged going into this game that not much was going to change from Week 2 to Week 3 due to the short week, but now they have a little extra time to evaluate his usage. Right now, he’s primarily been running go balls, at a rate far higher than anybody else in the NFL. It’s time to flesh out his route tree and give him chances to get the ball in his hands and make plays. He now has his calling card.