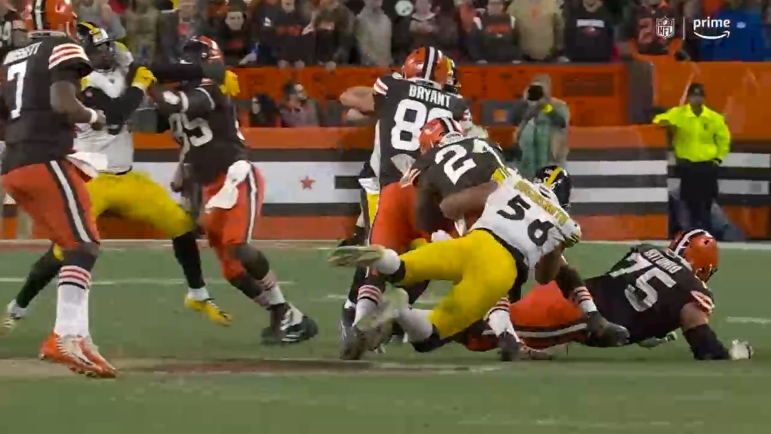 Reasoning: The third-year outside linebacker continues to have a strong start to his season in spite of the fact that those around him may not always be playing their best football. Highsmith currently leads the league in sacks, and is second in tackles for loss and fourth in quarterback hits.

Who would have thought that the Steelers would have the NFL’s league leader in sacks through three games and that it wouldn’t be T.J. Watt? Alex Highsmith has played most of the season with his more distinguished partner sidelined from a pectoral injury, but he’s still produced in his absence despite seeing more attention from defenses.

His first game without Watt last Sunday was a bit more quiet, but Highsmith was the most active bright spot on Thursday night for a defense that kept getting in its own way. He finished that game with eight tackles, including two for loss, with a sack and a half, including a beautiful spin move to finish on third down, and two quarterback hits.

He now has 4.5 sacks on the season, plus 20 tackles, four tackles for loss, seven quarterback hits, and a forced fumble. I know it’s still early, but it’s certainly starting to look like the front office is going to have to figure out how to get him under contract in 2023 with a handsome new extension before he hits free agency.

It’s true that the Steelers have been losing while Highsmith has been their primary pass-rushing threat, but you certainly can’t put that all on him. He’s been playing well regardless of his surroundings, but he can’t do it all on his own.

Can he still get better? Yes, of course he can, and that’s the beauty of it. He’s not even as good as he can be, and I believe will be, in the relatively near future. This is a guy who also basically missed training camp and the preseason and came ready to play at the start of the regular season without missing a beat. Here’s just hoping that he stays healthy.