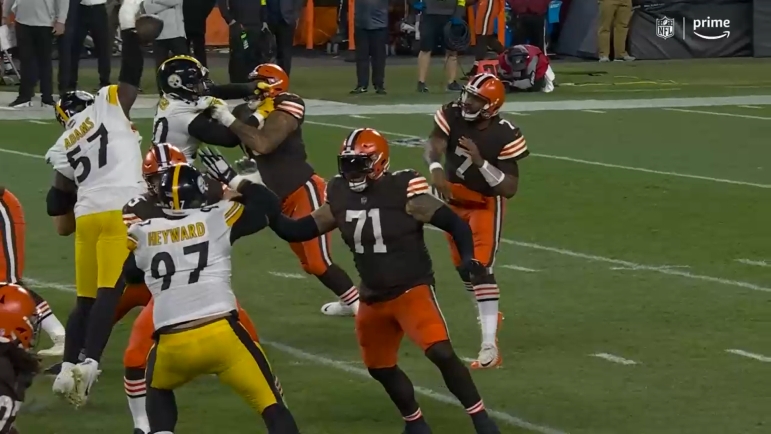 Reasoning: Montravius Adams is a starter for the first time in his career in year six, having spent his first four seasons in Green Bay playing behind Kenny Clark. Head coach Mike Tomlin named him the starting nose tackle this week over veteran Tyson Alualu, saying simply that he’s been playing better out of the two.

It’s not often that a guy that you sign off of somebody’s practice squad in-season because of mounting injuries becomes a starter for you at any point, let alone within the next year. But the Steelers appear to have found something in Montravius Adams, the former third-round draft pick of the Green Bay Packers.

Green Bay drafted Adams just a year after taking Clark in the first round, and well, needless to say, with a player of that caliber in front of him, he didn’t get many opportunities to showcase his talents, so he was a one-and-done guy there after his rookie contract ended.

He was recovering from an injury when he signed with New England initially in free agency last year, but they cut him due to the depth that they had at defensive tackle. The Saints picked him up and rostered him until they got a lineman back from suspension, after which they moved him to the practice squad, which is where Pittsburgh found him.

Already down Tyson Alualu at that point as well as Carlos Davis, and with Isaiah Buggs struggling, the Steelers were desperate, and Adams provided an immediate spark, including a surprisingly good get-off for a man his size.

He impressed enough that they re-signed him to a two-year contract in free agency this offseason. There was never a competition for the nose tackle position presented, but in hindsight perhaps there should have been, because he could have won it at the beginning of the season instead of the switch being made three games in.

After playing only 31 snaps in the first three games, Adams could be seeing that sort of workload on a weekly basis from now on. And I think he has a real shot at helping to make this defense better as a result of his play.