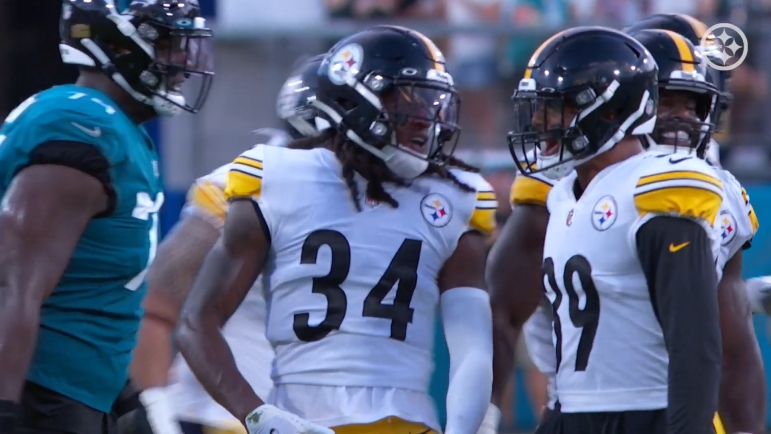 Taking one last look at the Pittsburgh Steelers’ 2022 preseason, I’ve gone through my weekly charting and wanted to pass along a couple of notable notes from the Steelers’ defense. This won’t be as expansive as what we do during the regular season and will focus more on the individual than the collective Steelers’ defense. But a couple interesting nuggets for you below. This is out of 209 defensive snaps.

– Third round rookie DeMarvin Leal logged the most snaps of any Steelers’ defensive linemen with 91 across three games. Carlos Davis was next with 70.

Leal was used in a variety of alignments: LDE, LDT, RDE, RDT, and even a NT snap, aligned as the zero-tech in one nickel package.

– Leal led all linemen with nine pressures. He was one of only two linemen with more than two pressures. Carlos Davis was the other with five. Leal averaged one pressure every seven rushes, an incredibly good number. Put it another way and his pressure percentage was 14.3%. Compare that to Davis who came in at a 10.6% pressure rate.

– Combined, the defensive line batted down six passes this summer. Cam Heyward was responsible for two of them.

– For what it’s worth, when Henry Mondeaux was on the field, opposing offenses average 3.3 yards per carry. Just preseason, a lot of variables, but better than what it was last year.

Neither of whom are on the team anymore, 53 or practice squad.

– Mark Robinson rightfully earned a bunch of praise this summer but he struggled in coverage. He allowed five catches on six targets for 56 yards and a touchdown. Some target numbers.

– An ILB blitzed on 16.7% of the opponents passes this summer. That’s slightly above the regular season last year at 14.0%.

– Tre Norwood easily saw the most defensive snaps of any Steelers’ defender, 141 overall. Here’s how those broke down:

– Speaking of which, the Steelers ran seven of those three-safety “big” packages this summer. If they want to do it again, they’ll have to find a different third safety than Damontae Kazee, who held that role this year. Miles Killebrew did it last year and they could return to that. Norwood is the other option. So is not using it at all.

– Target data for the DBs:

Strong numbers across the board. Good pass defense a big reason why the Steeles went 3-0 in the preseason.

– Last note and it’s an interesting one. Steelers blitzed a safety on 5.8% of pass attempts this preseason. That’s up from 4.4% over the 2021 regular season.