Today I wanted to piggyback off Dave Bryan’s fantastic Terrible Take from Tuesday, regarding the Pittsburgh Steelers third down woes and how it has been costing this team greatly. To recap some of the numbers Bryan highlighted, 13/39 on third down for a 33% conversion rate on the sixth lowest yards to go in the NFL (6.2), the second worst three and out rate per Alex Kozora. Pittsburgh has especially struggled when passing on third and two-five yards (20 plays, most in the NFL) with 1.3 yards per play which is the league’s worst number, and quarterback Mitch Trubisky going 1/12 when throwing five yards past the sticks (via Tom Mead). All very excruciating data to swallow, and my goal of this article will be to provide other data to pair with this. We’ll look at player stats as well as the team, and other situational football to see some areas of they can hopefully expand on for improvement moving forward.

First, let’s look at third down passes on the whole, but from the receiving perspective: 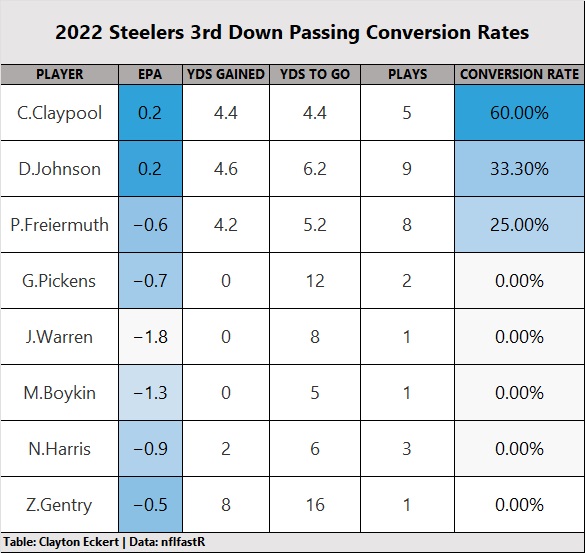 So far in 2022, wide receiver Chase Claypool has fared the best on third down with a 60% conversion rate. On his five opportunities, he has converted three of them, with 4.4 yards gained number aligns exactly with the average of 4.4 yards to go. The table highlights no other player with a yards gained number at or above the needed yardage! Claypool’s EPA (expected points added) tied with fellow wide receiver Diontae Johnson for the only two positive numbers, but Johnson’s has only a 33.3% conversion rate on his nine opportunities. His 4.6 yards gained is well below the needed 6.2 yards to go.

Tight end Pat Freiermuth begins the vast list of players with negative EPA results (-0.6), and has a 25% conversion rate on eight plays. Three players opportunities all resulted in incompletions: wide receiver George Pickens (two plays with one being a hail mary, affecting his average of 12 yards to go), running back Jaylen Warren, and wide receiver Miles Boykin. Two others had a zero percent conversion rate, starting with running back Najee Harris. He’s had three opportunities, with an average of two yards gained, but needing a much higher six yards on such plays. Tight end Zach Gentry is the final player with an opportunity, gaining eight yards but a poor third and long situation needing twice as many yards to convert.

So, other than Claypool the team has particularly struggled converting on short of the chain yardage, unable to get the necessary yards after catch to convert as well as the extremely low conversion rates on deep targets as stated earlier.

Here are the dots on third downs from my Steelers passing locations charting for more context: 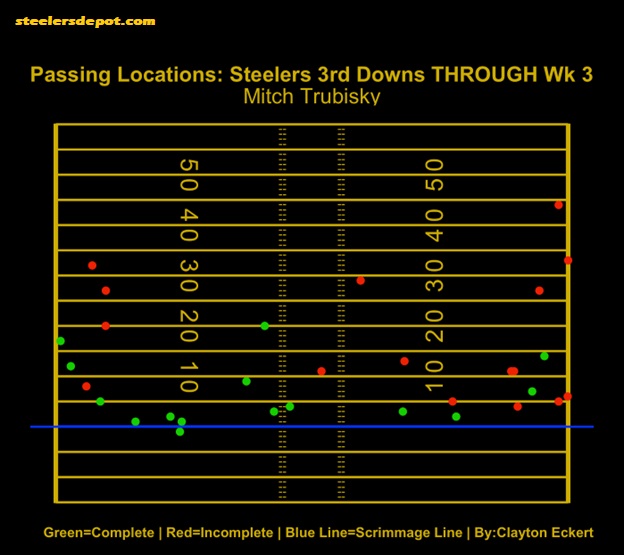 Pain. The first area that is especially unbearable are the explosive air yards throws, going 1/8 on such plays. This visually highlights another great point Bryan highlighted, with Trubisky throwing way beyond the sticks on third and short situations, which we can see has been extremely unsuccessful. The second area is the right side of the field, going 4/11 on non-explosive passes and 4/15 overall. The left side of the field has been better in terms of completions, going 10/14 overall and three of those being explosive incompletions. The one explosive success was a crucial one to Freiermuth in week one to aid the field position needed to get the game winning field goal in overtime for the Steelers only victory to date.

Next let’s look at the rushing data for third downs, where the team has been more successful:

Here we can see the Steelers have fared much better in the run game, especially on third and short on their six opportunities. Harris and fullback Derek Watt have provided a perfect conversion rate with an average of one yard to go, with the former gaining 3.5 yards on such plays. Trubisky has had two opportunities, converting on one of them but a much larger yards to go average of 6.5 yards. The other unsuccessful run was from Claypool, but a play the team was content punting on considering the 12 yards needed for the first.

While this is obviously a very low number of plays, my hope is that we see a bit more from the run game on third and short considering positive strides from the offensive line, the run conversion rates, and hopefully lifting some strain off the third down passing offense.

Here is a broader view showing how all teams have fared on third down to put Pittsburgh’s numbers into context: 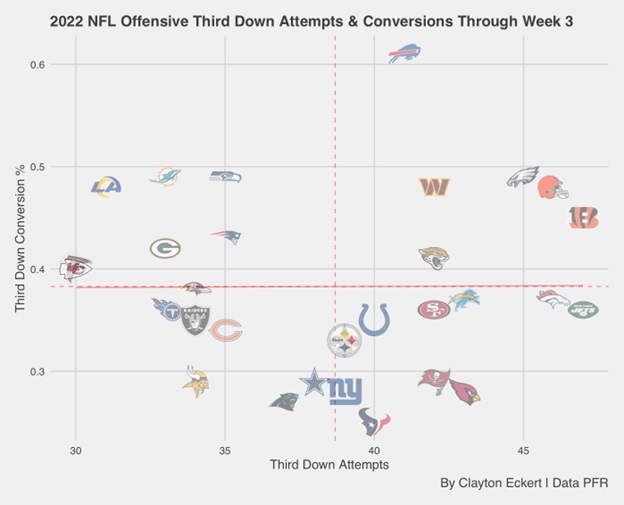 The Steelers have had an average number of opportunities (T-16th) but are tied for the rank 24th rank in conversion percentage at 33%.  Obviously, this below average conversion rate negatively affects many areas of situational football, which I’d like to highlight now. The first is obviously an inability to possess the football and sustain drives for scoring opportunities, so let’s see how teams have fared in this regard: 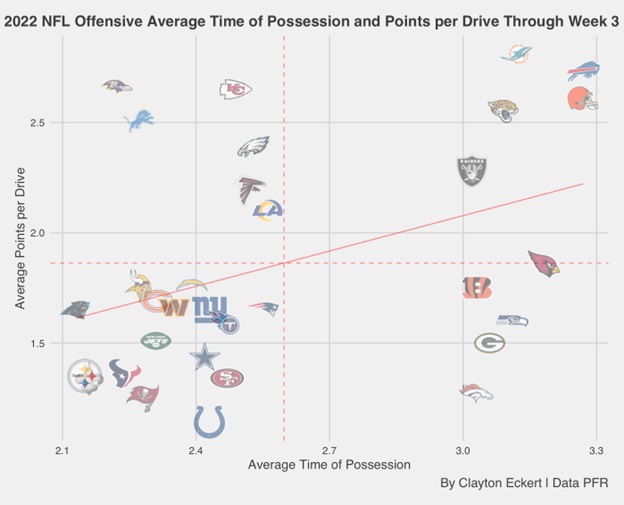 Right away we can see Pittsburgh has the second worst time of possession per drive (2:15), which has been one of the main factors in their two losses on the season, putting a lot of strain of the defense who lead the league in number of plays along with eliminating scoring opportunities for the offense. The Steelers average points per drive are not bad considering all the above, with the 27th rank at 1.35. This made me wonder how Pittsburgh and the NFL have fared in the red zone: 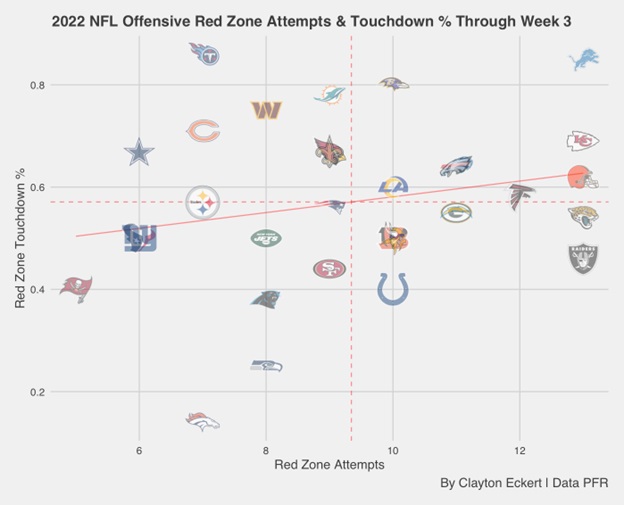 When Pittsburgh has made it into scoring position, they have fared well through three weeks with a redzone touchdown percentage of 57 that ranks 13th in the league. They obviously have had very low opportunities comparatively, with only seven which is third fewest. So, with everything considered in the article, here’s to hoping Pittsburgh can lean more on the ground game on third and short, take less deep shots on third and short for a hopeful increase in conversions, and thus giving more scoring opportunity which they have fared well in when given the chance, especially in the red zone.

Do you think Pittsburgh can improve on third down in the coming weeks? Thanks for reading and let me know your thoughts in the comments!