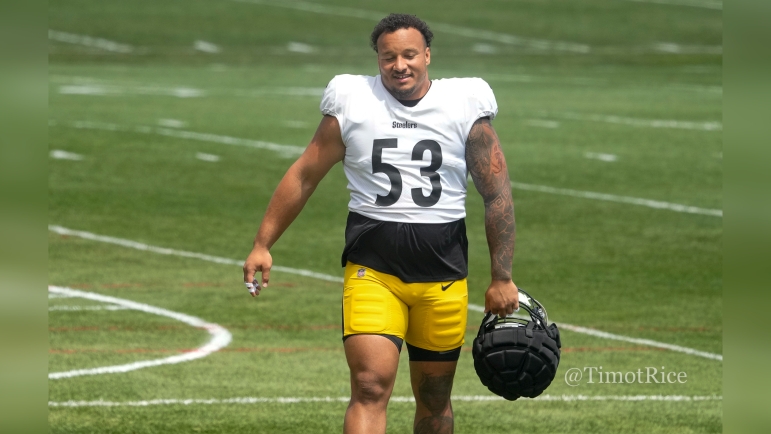 Question: Who will be the inactive offensive lineman for the season opener?

At least as of this writing, the Steelers currently have nine offensive linemen on their 53-man roster. With the most recent modification of the active list rules, it has become standard for teams to dress eight linemen, assuming they have eight to dress, since teams have been made allowed to carry a 48th active player into games, provided that it is an offensive lineman that is at least the eighth dressed.

In other words, if you have nine linemen, eight are going to dress and one is not. So who, specifically for the season opener, is not going to dress? There are two possibilities. We got the confirmation about the starting lineup yesterday, so that means we also know definitively who the backups are.

And they are T/G Trent Scott, C/G J.C. Hassenauer, G/C Kendrick Green, and G/T Jesse Davis. I have specifically listed a player’s dominant position first, reflecting that Hassenauer is a center first and guard second, for example. Hassenauer is the only strong center on the roster, so him dressing is a no-brainer. Scott is offensive line coach Pat Meyer’s pupil, and actually went through camp, so it seems very likely he is the swing tackle.

That leaves Green and Davis. Obviously, Davis is the much better option, in a vacuum. But, he also just got here. Davis in time will inevitably be the eighth linemen dressing, possibly even become the swing tackle and guard, in time. But the question is what their level of comfort is in putting him on the field five days from now.

It is more than possible for a team to get an offensive lineman ready to play in a backup capacity in a two-week span, and that very well may be what the Steelers decide to do with Davis, especially since Green is really only equipped to play left guard right now, arguably. Now that he is back in a reserve role, he’ll have to adjust to taking snaps at center again, and start working at right guard. So, again, the ultimate question is, will the Steelers feel comfortable enough with where Davis is in their system by the end of the week to dress him?