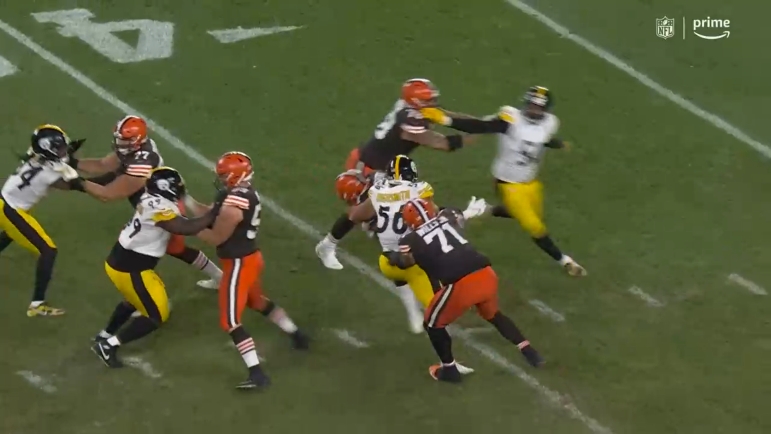 Question: How many sacks will Alex Highsmith have against the Jets’ backup left tackle?

The New York Jets, the Steelers’ next opponent, officially placed left tackle George Fant on the Reserve/Injured List yesterday. That means Alex Highsmith, Pittsburgh’s top pass rusher until T.J. Watt gets back, will be going after a backup all game.

Highsmith, who currently leads the NFL in sacks with 4.5 through three games, had a very good game working against the Cleveland Browns’ starting left tackle, Jedrick Wills, registering a sack and a half among other pressures throughout the game.

Will he have similar success or better against the Jets? Well, it partly depends on the gameplan. Right now, it sounds like New York expects to get starting quarterback Zach Wilson back, and if they do, they may be more likely to be very careful about exposing him to hits, which could translate to a lot of quick-release passes and max protection.

It is possible, generally, to scheme a player out of a game, no matter how great. It just takes dedicating the resources to accomplishing the task, whether it’s additional personnel, schematic structure, timing—any assortment of variables based on the position.

Sacks are not an easily predictable statistic, since it depends on so much going right, but that doesn’t mean we can’t have some fun with it. Let’s set the sack total betting line at one full sack (or two half-sacks), admittedly conservative. Would you take the over or the under?

Highsmith has really begun to come into his own since the second half of last season, and we’re seeing it reflected more and more in his statistics. I’m not just talking about working against the pass, but also his run defense, and in his ability to break off a rush to pursue a pass behind the line of scrimmage. He’s really been a good play thus far this year, and at least on paper, Sunday’s matchup certainly looks like a favorable one.