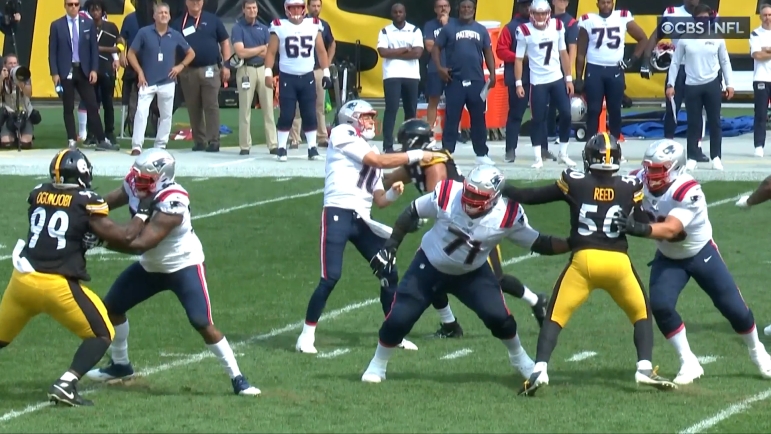 Question: Can the Steelers manage a competent pass rush against the Browns?

Although I believe there has been just a bit too much criticism about the pass rush in Sunday’s game, particularly when it comes to calling out individual players—for example, Alex Highsmith overall had a fine game despite not registering a sack—the end results speak for themselves.

Taken as a whole, the Steelers’ pass rush didn’t do its job against the New England Patriots. Yes, the Patriots had a lot to do with that, and clearly they have a better and more disciplined offensive line than the Bengals did. But the Browns have a good line as well.

Cautioning against sample bias, the numbers without T.J. Watt on the field are obviously not very good, or where anybody on that roster would want them to be. And we know Watt isn’t going to be out there for at least another three games at the absolute minimum. So what can they do to create issues for Jacoby Brissett?

One thing that’s apparent is that a strict four-man rush without the best pass rusher in the game is not as effective, so more blitzing may be wise. We have seen some experimentation and success with blitzing defensive backs. Myles Jack probably wouldn’t mind some A-gap assignments, either.

Beyond that, my bigger concern is actually containment. Brissett might not strike fear in the hearts of defensive coordinators around the league, but he can skedaddle, and the Steelers have a history of leaving leaky scramble lanes, which this quarterback will take advantage of.

But the pass rush itself needs to be more successful. Cameron Heyward can’t be quieted as much as he was on Sunday. He is supposed to be their best player on the field right now and he didn’t look like that on Sunday. Highsmith still needs to do more, while they ask him to adjust to flipping to both sides.

Breaking out the 3-3-5 package has as of yet not born fruit in terms of producing pressure, but I think it’s worth continuing to develop. If nothing else, it’s a way to get DeMarvin Leal on the field. One thing we know is that nothing the Steelers do will adequately replicate having Watt on the field, so the expectations have to be lower. But it can and should be better than this. It’s not like the other 31 teams have a Watt.