The Pittsburgh Steelers now have kicker Chris Boswell signed to a long-term extension that results in his being the highest-paid player in the NFL at his position. On the heels of that signing, early details related to Boswell’s extension have surfaced, and with those, below is a projected look at the team’s 2022 salary cap situation as we sit here on Tuesday.

As I reported on Monday, Boswell’s extension should result in the kicker having a new 2022 salary cap charge of $5,043,334. That is an increase of $95,000 from what it was originally scheduled to be. If the cap numbers and structure provided to me are correct, the team would then be $13,950,841 under the cap.

I now have the Steelers projected at not having in any effective salary cap space that they can use, barring them restructuring the contracts of either outside linebacker T.J. Watt or defensive tackle Cameron Heyward. That current ($192,359) projection number takes into account several expected forthcoming and predicable costs the team will have prior to Week 1 of the regular season. Sure, the team has room in real-time that they can use, but using any more significant amounts figure to result in a restructure being needed prior to Week 1.

With the extensions of Boswell and safety Minkah Fitzpatrick now out of the way, the Steelers will almost certainly need to restructure Watt’s contract to some degree before Week 1 should they decide they want to sign wide receiver Diontae Johnson to a contract extension as his current 2022 salary cap charge of $3,073,357 would surely increase as a byproduct of a lucrative new deal.

The projected future salary cap expenses in the table below are based on the history of the team the last two years. 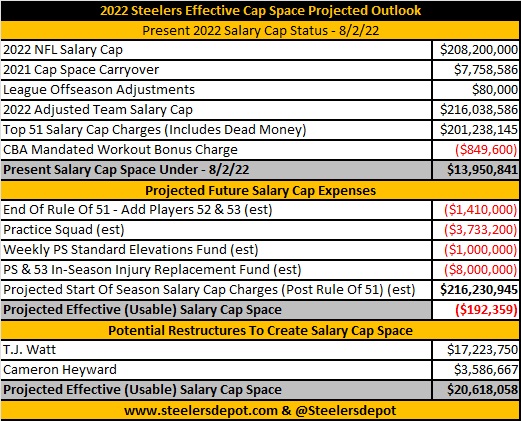