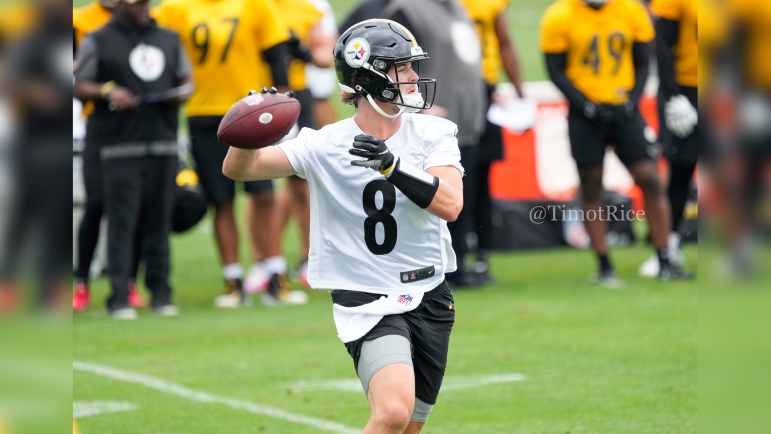 At the conclusion of Tuesday’s practice, Mike Tomlin addressed the media with an injury update as well as his pleasure seeing guys compete in a physical environment as the team finished their second padded practice of training camp.

When asked about Kenny Pickett and what specific qualities he’s looking for the rookie QB to demonstrate in training camp, Tomlin kept his answer short and sweet.

“Playmaking,” Tomlin responded to the question per video on the Steelers website. “You know, he’s not a 7B, you know what I mean? We expect quality playmaking, and we like the things he has done thus far.”

Kenny Pickett was drafted in the first round of the 2022 NFL Draft with the hope of becoming the Pittsburgh Steelers’ next franchise QB after Ben Roethlisberger retired this offseason. While he was tabbed as the most “pro-ready” quarterback draft prospect in this year’s draft class, he has had some ups-and-downs adjusting to the speed of the NFL game thus far in training camp.

While he has been primarily operating behind Mitch Trubisky and Mason Rudolph as the #3 QB on the depth chart, Tomlin has stated numerous times that the depth chart isn’t set in stone and all three QBs will be given the opportunity to mix in with different offensive units throughout training camp to properly evaluate their respective performances.

Regardless of if Pickett wins the starting job or not for Pittsburgh’s Week 1 matchup against the Bengals, Tomlin expects his rookie QB to show gradual development and the playmaking qualities that prompted them to take him in the first round to potentially become their new franchise QB. For now, Pickett needs to string a few good days of practice together and showcase his development once the Steelers hit the field to take on the Seattle Seahawks in preseason action.