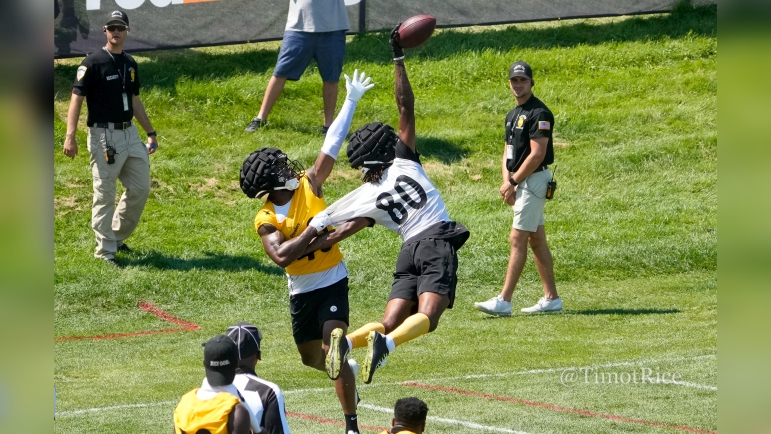 I don’t want to lean too much on the phrase it’s early too much longer, we’re well over a week into camp, but there’s a long ways to go. The Pittsburgh Steelers have yet to play their first preseason game and the final roster spots are far from being decided. But in the middle of this longest stretch of camp, six straight practices that end today, I wanted to take a step back at and talk about my favorite players – the camp darlings. The guys at the back end of the roster working hard and turning heads. Here’s three guys who aren’t getting a lot of buzz but quietly having fine starts to the summer.

WR Tyler Vaughns – It’s a deep receiver room with the focus on the two draft picks, George Pickens and Calvin Austin III, along with the news of Diontae Johnson’s new contract. Truth be told, Vaughns is fighting for a practice squad spot, not the 53. But for a guy who didn’t test well coming out of USC, a 4.69 40 (at his Pro Day, no less), 31.5-inch vertical, and 7.15 three-cone, he’s a fluid route runner with short-area quickness that’s impressed WRs Coach Frisman Jackson. Over the four padded practices, Vaughn has five receptions for 55 yards in team drills. The receptions are tied for the third most over that span, while his yards rank second among all Steelers, only trailing Calvin Austin III.

He’s tracked the ball well in the air and displays plus body control to high point and pluck the ball away from his body. He’s got size and mostly worked on the outside with a bit of return value, including a punt return touchdown in college. Even with an injury or two, Vaughns’ path to the 53 is narrow, but he’s setting himself up to remain on the team’s practice squad so long as he can carry over what he’s doing now through the rest of the summer.

OLB Delontae Scott – There’s still a hearty battle for the backup pass rush spots behind T.J. Watt and Alex Highsmith. Genard Avery and Derrek Tuszka have worked as the top backups while Tuzar Skipper is trying to recapture the magic he had in his first time with the team. Scott has accomplished the most forgotten part of camp – stack good days. Anyone can be good for a day. Sustaining is what gets you on a roster. Scott’s been excellent since the pads have come on as a pass rusher and run defender, working off blocks, making plays at or behind the line of scrimmage, schooling Zach Gentry in backs-on-backers, and batting down passes on his way to the QB. I’m still not sure if he’s going to make the 53, it’s still a competitive battle and the group has been solid, including UDFA T.D. Moultry, but Scott has consistently been strong this week. Having a full offseason as opposed to catching the moving train, signed last September, has certainly helped.

ILB Mark Robinson – Thank to his seventh-round selection, Robinson is a bigger name than the other two on this list. But he was still viewed outside-looking-in heading into the summer. He’s still on the bubble thanks to how highly competitive the inside linebacker room has been but Robinson has flashed since Day One. He’s looked more comfortable moving backwards in coverage and has shown he can make plays on the ball, thinking like a tight end or running back running option routes over the middle. He has the quick change of direction ability good runners must possess and he can sink and drive his hips to effectively break on the ball.

He’s filled his gap well in run sessions playing with energy and intensity but not being overaggressive and reckless. The ILB battle will be one of the fiercest and probably won’t be decided until the final hour, though Marcus Allen’s probably hoping for that hamstring injury to heal soon. Unfortunately, he’s probably still at least a week away from returning and may not play in the first preseason game.