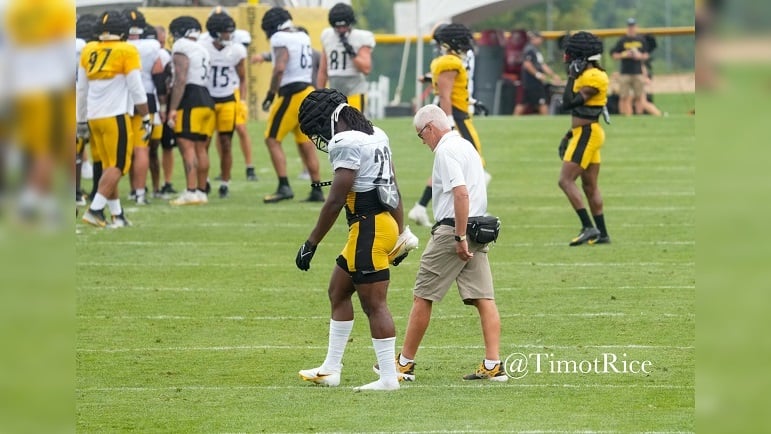 Remember when superstar running back Najee Harris got injured on the first day of the 2022 Steelers training camp and Head Coach Mike Tomlin said he just got stepped on and it was no big deal?  After Harris finally saw preseason action against the Lions yesterday, he admitted to the media that he was recovering from a Lisfranc sprain and was glad to be back four weeks later.  Suddenly, Harris’s availability for the upcoming season seemed a bit less certain.  While he mentioned that his recovery period was estimated to be four to six weeks, the potential for re-injury is a concern.  And without Harris, the Steelers chances for an effective offense obviously decrease significantly. 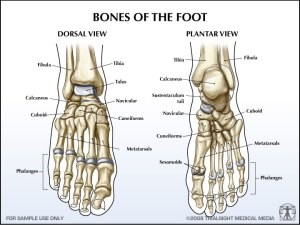 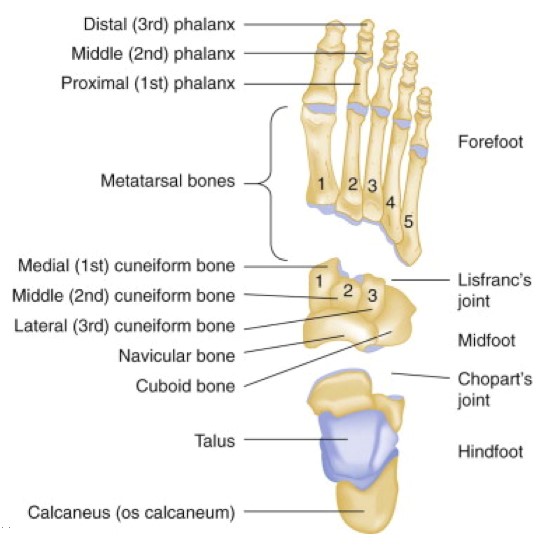 The foot is broken up in sections.  The forefoot includes the bones of the toes (phalanges) and the long bones (metatarsals).  The midfoot contains a collection of bones that make up the arch (the cuboid and cuneiform bones), and the hindfoot is the heel (the talus and calcaneus).  There are ligaments that hold all the bones together…with one exception.  There is no ligament between the 1st and 2nd metatarsal, which adds increased flexibility to the joint but also leaves that part of the foot more vulnerable.

Most weird anatomical names come from the physician or surgeon who originally described it, and that is true of the Lisfranc joint.  Jacques Lisfranc was a field surgeon in Napoleon’s army.  A soldier fell from his horse but twisted his foot, which was stuck in the stirrup.  Lisfranc had to amputate the soldier’s forefoot due to the injury (fortunately, we have better options these days!), and he chose this joint as the point for transection. This slide was part of a presentation by an assistant professor at the University of Sharjah in the Emirates, and it shows why the Lisfranc injury is so confusing because there are so many different points of contact between the bones, and the type of Lisfranc injury depends on which part of the joint complex is involved: 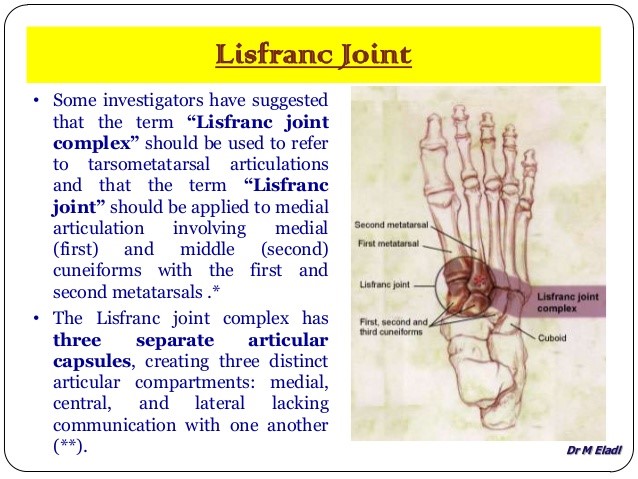 On top of that, a Lisfranc injury ranges from a torn ligament (sprain) to a fracture and even dislocation.  A Lisfranc injury can often be mistaken for a simple sprain at first.  But it is different from a regular sprain because even with the mildest form of a Lisfranc injury, there is joint instability where the forefoot and the midfoot articulate, or bend.  Even with just a Lisfranc sprain, you can see widening of the joint space between the 1st and 2nd metatarsal bones.  And even without a fracture, there can still be significant dislocation of the bones, as you see in these X-ray images from the American Academy of Orthopaedic Surgeons: 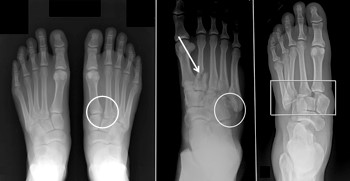 The first X-ray shows a normal left foot and a widening the 1st and 2nd metatarsal joint space in the right foot due to a Lisfranc sprain.  The middle X-ray shows a fracture of the 2nd metatarsal (indicated by arrow) and the cuboid bone (in circle), where the bones are no longer aligned correctly.  The right X-ray shows a severe injury with complete dislocation of the entire midfoot, even though there are no actual fractures.  This patient will certainly need surgery to realign those bones and possibly even a fusion of the midfoot.

How does this injury happen to NFL players when they aren’t riding horses in Napoleon’s army, you ask?  There are two common scenarios: 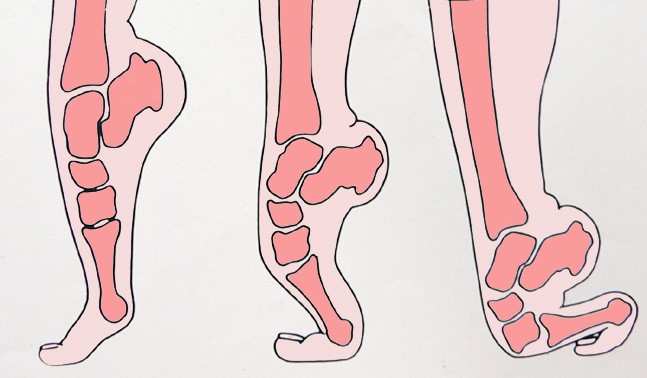 The diagnosis of a Lisfranc injury is made by physical exam and X-ray.  Swelling of the midfoot as well as bruising on the both the dorsal and plantar surfaces is common.  On X-ray, joint abnormalities can be identified.  MRI is not necessary to make the diagnosis but it is the best way to diagnose specific ligament tears.

Fortunately, it seems as though the Steelers got lucky with a milder injury and Harris will not require surgery.  If he did, it would probably involve having screws and plates placed in his foot to stabilize the joint and allow it to heal in the proper alignment.  The hardware usually gets removed with a second surgery further down the road.  Here is an example of what it might look like: 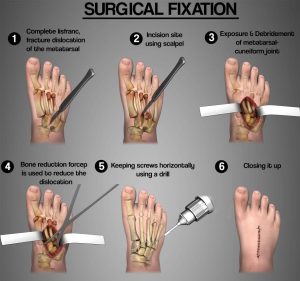 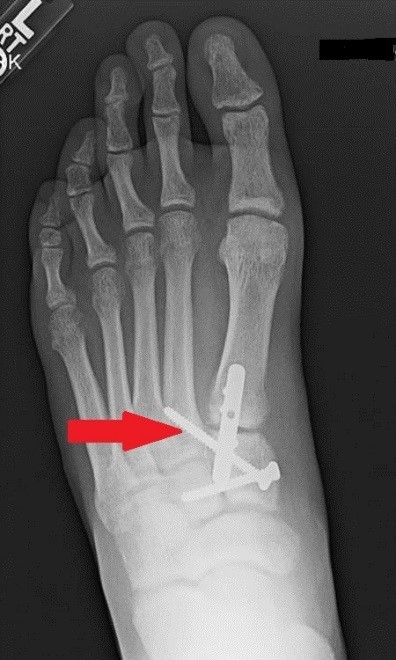 While Harris was seen coming and going from the field at Latrobe in a cart, this was likely just a precaution due to the length of the walk to the practice field.  He never required a boot or any immobilization and was noted to be walking with only a minimal limp in the weeks following the injury.  And he was able to play in the final preseason game, logging 28 snaps with four carries for ten yards and catching all three of his targets for eleven yards.  Not a stunning performance but not surprising given his limited participation in practice and his own comment that he felt rusty.

Harris’s recovery is actually surprisingly fast based on data from the NFL database published in 2016 in the American Journal of Sports Medicine, which quoted a median recovery of 11.1 months from the time of injury.  Then again, the Steelers have a better example with Le’Veon Bell, who suffered a minor Lisfranc injury during the 2013 preseason.  He flew to London and returned to action against the Minnesota Vikings in late September, logging 16 carries for 57 yards with two rushing TDs and added four receptions for 37 yards.  He didn’t suffer any setbacks the remainder of the season.

There is not any reliable data regarding the recurrence rate of Lisfranc sprains in NFL players but looking at individual cases, it appears to be low.  With that in mind, the Steelers were wise to be cautious with Najee Harris.  He has two more weeks until regular season action and hopefully he will be at full strength by then.