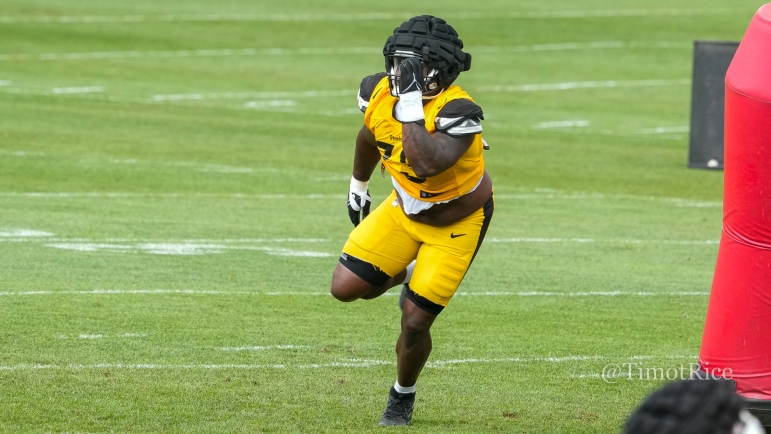 Wonder twin powers, activate. No word on if Carlos and Khalil Davis will join rings in order to harness their powers, but based off what’s happened in Latrobe, PA, the two will have their name called quite a bit inside stadiums this summer.

Both have quietly enjoyed solid camps with – predictably – similar skillsets. The Davis brothers are rare athletes for the position, explosive but also fluid in space. Each have even gotten work on special teams coverage drills during practices. It’s unclear if they’ll actually see time there Saturday night against Seattle, the Steelers are working with a 90-man roster and have plenty of linebackers and running backs to handle some of those responsibilities, but the fact they’re getting looks there speaks to their athleticism.

Each player are explosive off the ball, squatty players with bigger lowers halves, Carlos a little more so than Khalil, but each can penetrate and get into the backfield. Carlos has a slightly quicker first step whereas Khalil is more of a hand fighter to immediately discard blocks and works clean, especially as a pass rusher. In OL/DL 1v1 battles, each guy has done well. I went back and broke down their wins and losses from all the OL/DL work heading into Thursday. Here’s how each have stacked up.

Good marks for both but especially Carlos, who has rarely lost in those 1v1 moments. That won’t exactly be what he’ll see inside stadiums, but if guards or centers slide away from him and he’s solo against a blocker, odds are he’s going to win it. The only blip this summer was Carlos’ cheap shot on Jake Dixon, running from the sideline to earhole Dixon who was mixing it up with Khalil at the end of a rep late in practice. It wasn’t an acceptable act, but it was one brother sticking up for another.

Defensive linemen have the chance to shine in preseason action. They’re facing backup offensive linemen, rookies, first-year players, guys with zero or little reps. Opposing offensive lines are trying to play as a collective unit despite having very little time as a starting five. It’s a group prone to errors and mistakes and waiting for athletic, explosive players like the Davis twins to take advantage. I can’t tell you how consistent their play will be but I’m confident each will make plays this summer. Tackles for loss, pressures, sacks, things that stuff the box score. Each have the skillset to dominate during the summer.

The odds of them making the 53-man roster will be difficult. It’ll likely take an injury to crack that group, though NT Montravius Adams’ ankle injury is certainly worth monitoring. While the fear is typically unfounded, if waived, I could see either Davis’ brother but especially Carlos be in danger of being claimed off waivers. A solid outing in preseason games will have them on pro scout’s radars and a defensive line-needy team could pluck either off waivers. But those are hypotheticals for later this summer. To the here and now, Carlos and Khalil are twitchy, athletic linemen and those traits will play well starting tomorrow night.