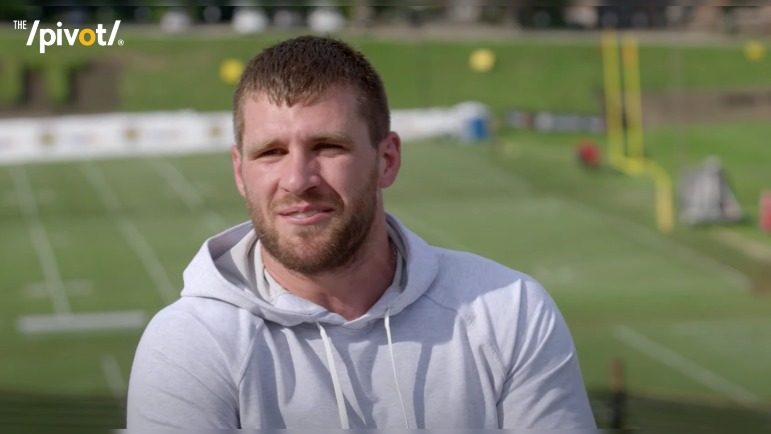 Pittsburgh Steelers OLB T.J. Watt made a guest appearance on The Pivot Podcast Tuesday, speaking with show hosts Ryan Clark, Fred Taylor, and Channing Crowder about the current state of the Pittsburgh Steelers as well as being one of three brothers in the Watt family that have successfully made it to the NFL.

Watt was asked by Taylor about the void of leadership the offense has experienced this offseason after QB Ben Roethlisberger retired and who he is looking to on the offensive side of the football to step into that role in 2022. Watt acknowledged that no one can really replace what Ben brought to the table, but that there are indeed several candidates that he sees as capable for an elevated role this season.

“I think Najee’s a big one,” Watt said on The Pivot which also aired on the show’s YouTube channel. “I think we’re trying to find a stud on the O-Line, like the dog on the O-Line. I think bringing in a guy like Mason Cole, I think Chuks Okorafor is a nice guy as well. And then, you look at the receiver, Diontae Johnson’s the guy who just got paid as well. And it’s funny because it doesn’t always have to be the highest paid guy. It doesn’t always have to be the most successful guy. It just has to be a guy that has respect from all of his teammates. So, that’s why we’re here. We’ll see who comes out of training camp as the big dog leader from the offense.”

RB Najee Harris’ name has been brought up several times this season as an offensive player that will need to step up after the retirement of Ben Roethlisberger into more of a leadership role in 2022. Guys like Cam Heyward and Mike Tomlin have acknowledged this along with Watt, but Harris has put it on his own shoulders as well, stating that he wants to be that leader on offense, but also acknowledged that the offense needs leaders at every position.

This is the same structure of leadership that Watt points to above, naming Najee Harris as a key candidate for leadership, but also stated that they are actively looking for “the dog” on the offensive line. He first mentioned C Mason Cole, who just signed with Pittsburgh this offseason, as a potential candidate, and brought RT Chukwuma Okorafor’s name to the table. Anyone who keeps up with the team likely knows that Okorafor is a more soft-spoken guy not known for his flamboyant personality, like we have seen in limited sample sizes from Cole. However, he is the longest-tenured member of the Steelers OL and has shown improvement since entering the league in 2018, having himself a strong showing in Pittsburgh’s first preseason game.

The highlight of this play was the pancake from Chukwuma Okorafor. https://t.co/Fnytsbdi0k

Watt also points to WR Diontae Johnson as a leader in the WR room fresh off a Pro Bowl nod last season and inking a two-year contract extension with Pittsburgh during training camp. However, Watt also acknowledged that your leaders don’t always have to be your highest-paid players or your best players on the roster. Rather, it must be the guy that generates respect and buy-in from his teammates.

One clear example that sticks out is former Steelers LB Vince Williams, who was a sixth-round draft pick out of Florida State and made the roster as a core special teams player and downhill thumper against the run. He ended up having himself a solid career in Pittsburgh, posting 479 tackles, 20.5 sacks, two INTs, and five fumble recoveries while starting 69 games. Williams wasn’t ever the most talented or highest-paid player on the roster, but he was well-respected by his peers as the Energizer bunny on defense, getting everyone hyped up as he played a hundred miles per hour all the time.

Vince Williams was proof you didn't need to be the biggest or fastest dude to have a long, successful NFL career. Just be physical, smart, and a leader. He sure let you know if you weren't in the right place. #Steelers pic.twitter.com/gQKvVnjS2m

Pittsburgh is entering 2022 without a clear identity in teams of leadership on offense that they had the previous 18 seasons with Ben Roethlisberger at the helm. However, T.J. Watt has seen several candidates that appear ready to that that leadership role by the horns as Pittsburgh prepares to enter a new era. Still, it will be a group effort by the offense and the team as a whole to foster that leadership and help take this team to the heights it hopes to achieve this season and beyond.