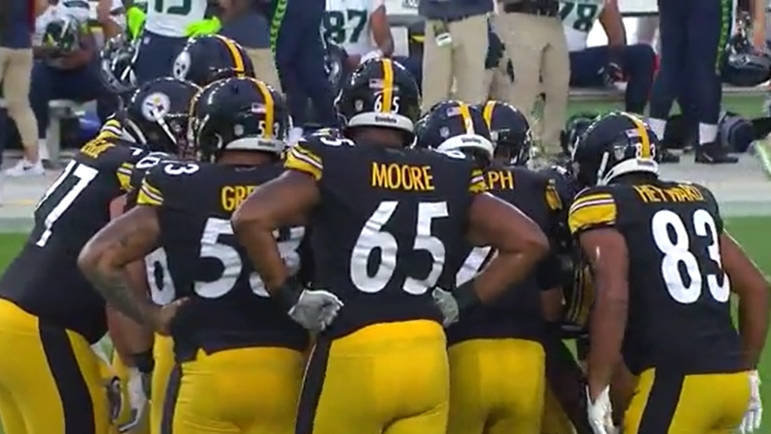 The roster for the Pittsburgh Steelers underwent a significant transformation in the offseason, bringing in a new quarterbacks, adding some key offensive linemen, a new linebacker, defensive lineman and a pair of new defensive backs.

In the draft, the Steelers continued to add to the offense, drafting two quarterbacks, two receivers and a tight end, not to mention defensively adding a defensive lineman and a linebacker.

After all the changes in the offseason though on the roster, plugging holes and making upgrades, the Steelers roster still ranks as one of the league’s worst for ESPN’s Mike Clay, who slotted the Steelers roster at No. 25 overall based on his position group rankings Friday morning. Within the AFC North in general, Clay had the Cincinnati Bengals at No. 4, the Baltimore Ravens at No. 10, and the Cleveland Browns at No. 13, so he very clearly believes there’s a sizable gap in talent between the Steelers and the rest of the division, in a negative way.

Quite the take from Clay.

According to his position group rankings, Clay has the Steelers’ offense being dragged down by the offensive line, which he slots in as the worst in the league at No. 32 overall. At quarterback, Clay has the Steelers ranked No. 29. Running back sits at No. 17 for the Steelers, while wide receiver and tight end rank No. 15 each.

While much of the attention will be paid to Mitch Trubisky, Mason Rudolph and Kenny Pickett under center in determining the success or failure of the new-look Steelers offense in 2022, much of that success will depend on the offensive line improving. Clay doesn’t see that happening, calling the Steelers’ offensive line the “shakiest” in the league at the position.

“The Steelers top this list for the second year in a row after failing to make enough impact additions during the offseason,” Clay writes for ESPN.com regarding the Steelers offensive line’s ranking. “Dan Moore Jr. is back at the all-important left tackle position after posting an ugly 77% pass block win rate in 2021. Right tackle Chukwuma Okorafor has ranked poorly in PFF grade, pass block win rate and run block win rate each of the past two seasons. Left guard Kevin Dotson also checked in below average in each category last season.

“On the plus side, Mason Cole is a potential upgrade from Kendrick Green at center and new right guard James Daniels is immediately the team’s best lineman. No help seems to be on the way, as Pittsburgh spent none of its seven picks in the draft on the offensive line.”

Clay’s line of thinking checks out with everything else that’s been said about the offensive line throughout the offseason. The tackles aren’t good enough, Kevin Dotson at left guard is a major question mark, and Mason Cole and James Daniels are upgrades. That all might be true, but it’s the same talking point over and over again, so it’s not revealing anything new.

Moore and Okorafor could take significant steps forward, and if Dotson can just stay healthy the Steelers might have a strong option at left guard. This offensive line doesn’t look great on paper, which is a totally fair stance to have, but there’s a good chance Moore takes a huge step forward in 2022 and Okorafor settles nicely into his role under first-year position coach Pat Meyer. Those two developments alone would help the offensive line improve as a whole.

Defensively, Clay has the Steelers’ interior defensive line at No. 6 overall, and the EDGE rushers at No. 5, making for a rather stout front unit overall. With off-ball linebackers it gets messy, as expected, as the Steelers rank No. 22 overall for Clay. Cornerback is even worse in Clay’s opinion, ranking No. 28, while the Steelers safety group ranks No. 12 overall.

The interior defensive line and EDGE rankings feel pretty solid overall from Clay, and the off-ball linebacker ranking for that matter, but the cornerbacks are far too low, and same for the safeties.

The top three of Ahkello Witherspoon, Cameron Sutton and Levi Wallace is pretty darn solid overall and warrants a higher ranking than 28th. Depth is an issue, and that’s fine to knock them for that, but No. 28 overall is far too low. Safeties at No. 12 feels about 5-6 spots too low as well.

Minkah Fitzpatrick himself is one of the top safeties in football, and Terrell Edmunds is quietly a steady player overall. The addition of Damontae Kazee makes this a really strong trio overall, as does the second-year growth of Tre Norwood, who is a real chess piece defensively, much like Kazee.

It will be interesting to watch how these rankings play out in 2022. Clay feels pretty low on the Steelers overall, but that’s not too shocking overall. There’s uncertainty, and some of the names in key positions on the roster are ones that carry negative emotions for some. Now it’s all about showing it on the field, rather than meaningless rankings and fodder.