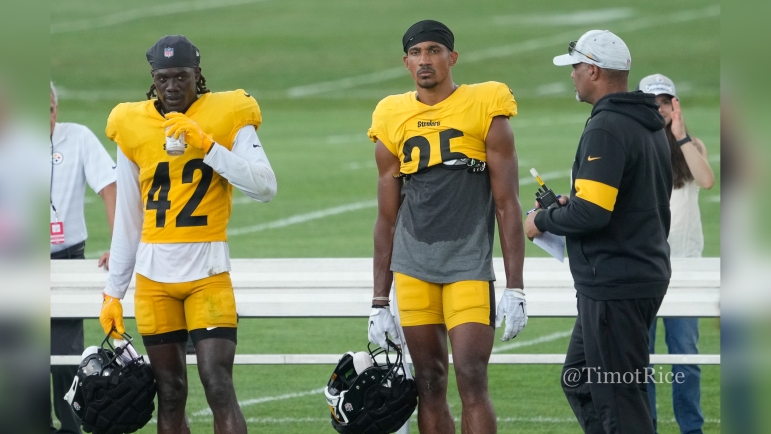 Similar to the Pittsburgh Steelers’ last change in Defensive Coordinator from Dick LeBeau to Keith Butler in 2015, the team hired from within upon Butler’s retirement, promoting Senior Defensive Assistant & Secondary Coach Teryl Austin to the position. In a Friday morning interview on DVE Radio Friday AM, cornerback Ahkello Witherspoon highlighted the significance of the team’s familiarity with Austin.

“Yeah, I think we all benefit from being coached by our [secondary] coordinator last year,” Witherspoon stated regarding the secondary’s familiarity with Austin. “So, we all see the game the same way. We’ve had those intimate discussions in our room. We’re just kind of carrying over that knowledge and that understanding of the complete defense this year. We have a lot of communication that comes from the back end and all of us are, are more than capable and more than willing to give our input on a given down. So, I’m just really excited for all of our brains to come together, and really be able to be on the same page and dominate as a defense.”

A third-round pick by the San Francisco 49ers in 2017, Witherspoon played four years for the team, including a season alongside cornerback Richard Sherman in the team’s 2019 Super Bowl berth. Witherspoon subsequently signed with the Seattle Seahawks, where he did not play a regular-season snap due to being traded to the Steelers in early September for a fifth-round pick. While he struggled to see the field at first, Witherspoon’s two-interception performance against the Minnesota Vikings cemented his role as the starting outside cornerback next to Joe Haden. According to Pro-Football-Reference, Witherspoon gave up a passer rating of 35.1. Granted, this was on a limited snap count. That said, it is an impressive feat nonetheless, especially given that it accounts for a 61-yard Week 2 touchdown that he gave up against Henry Ruggs of the Las Vegas Raiders, which Witherspoon seemed to indicate earlier this offseason was really more on safety Minkah Fitzpatrick.

“I think what makes players great is, is being diligent and being true to the scheme, but then finding those areas and finding those lanes that you can kind of venture off and help this team win football games,” Witherspoon stated when asked about the importance of staying true to schemes and coaching changes, as well as his diverting from the scheme for an interception against the Vikings. “And I’m kind of learning that and understanding that in a new defense because that’s gonna look different than areas that I’ve done it in the past. And I’m just excited to keep building on that and communicating with my coaches and getting better in that aspect of my game.”

Making a read and diverting from the scheme is not a foreign concept in Steelers history, as Hall Of Fame Safety Troy Polamalu is well-known to have often done so. The play that Witherspoon is referencing is his Week 14 fourth-quarter interception of Vikings’ Quarterback Kirk Cousins, where he read a slant route to make a play and give the Steelers momentum while trailing by 16 points. With safety Minkah Fitzpatrick making many instinct-motivated plays, Witherspoon continuing to make such plays will create more much-needed turnovers from the Steelers’ secondary in the upcoming 2022 season and its offensive uncertainty. As Witherspoon also mentions, being diligent to the scheme is also indeed important, as the Steelers often struggled to do so in 2021 due to the youth and injuries in the secondary.

Witherspoon has a second one #Steelers pic.twitter.com/fqdNT5SJRE

Having recently re-signed for a two-year deal with the Steelers this past offseason, Witherspoon is now slated for a chance to start a full season with the team. At 27 years old, capitalizing on his impressive 2021 season could earn him a bigger pay-day down the road and a chance to be the team’s number one corner for the next several seasons.