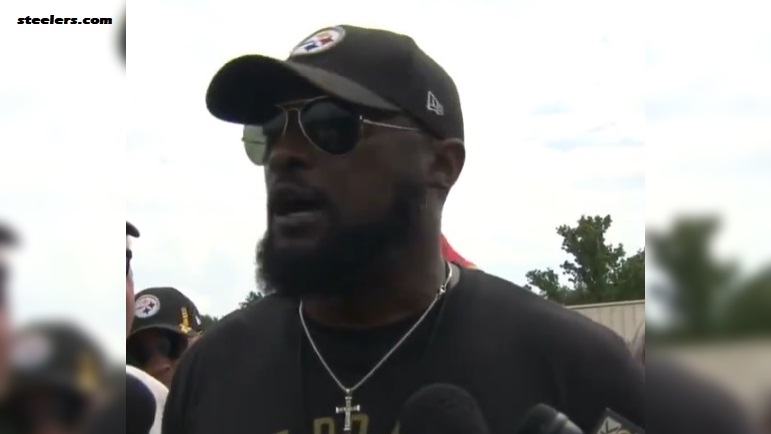 The Pittsburgh Steelers have now wrapped up their eleventh training camp practice of 2022, and after the Monday session was completed at Latrobe Memorial Stadium, head coach Mike Tomlin provided another brief update on the heath of the team.

“Excited about just guys working their way back to us,” Tomlin said on Monday after practice. “[Tyson] Alualu came off the [PUP] list today and was able to begin his process. Many of the others are starting to work in a partial capacity and the key is for us not to take any steps backwards as we move forward with these guys and pushing them back to full participation. And so, from that standpoint, I thought it was good.

“Got a couple of new bumps and bruises to manage and deal with. [Alex] Highsmith, ribs. Diontae Johnson, hip flexor, [Genard] Avery, groin. Things associated with this time of year. [Kevin] Dotson, ankle. We’ll get those guys evaluated. Hopefully those can be described as day-to-day, and we’ll continue with this process.”

As Tomlin said on Monday, the new injuries include the likes outside linebacker Alex Highsmith (ribs), wide receiver Diontae Johnson (hip), outside linebacker Genard Avery (groin) and guard Kevin Dotson (ankle). We’ll have to see just how day-to-day those four players are starting on Tuesday.

Steelers inside linebacker Ulysees Gilbert III (ankle?) and fullback Derek Watt (shoulder?) both sat out on Monday, so those are two players who must have been injured over the weekend. Tomlin did not name either during his Monday press conference. Running back Najee Harris (foot) and inside linebacker Marcus Allen (hamstring) remained sidelined on Monday.

Defensive tackle Tyson Alualu (knee), who was removed from the Active/PUP list, was limited on Monday, according to Alex Kozora. Tight end Pat Freiermuth (hamstring) and safety Miles Killebrew (pectoral) were both limited on Monday but seem a lot closer to returning to full participation, according to Kozora. Wide receiver Chase Claypool (shoulder), Karl Joseph (personal), Minkah Fitzpatrick (wrist), and defensive tackle Larry Ogunjobi (foot) were all full participants on Monday, and that’s obviously great news.

The Steelers waived rookie outside linebacker T.D. Moultry as injured earlier on Monday. He should revert to the Reserve/Injured list on Tuesday if he clears waivers.

The Steelers next training camp practice is scheduled to take place on Tuesday. Hopefully that session will take place at Saint Vincent College.