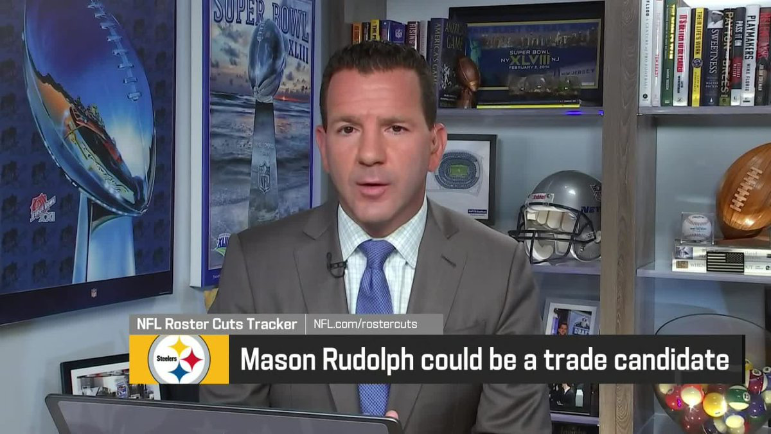 Appearing on NFL Network’s NFL Now Monday, Rapoport revealed that Steelers GM Omar Khan is receiving some calls about a possible Rudolph trade, though the first-year GM said on the All Things Covered podcast Monday with former Steelers cornerback Bryant McFadden that he doesn’t anticipate any changes at the QB position.

Still, with Rudolph’s experience, cap hit and overall abilities as a backup quarterback, there’s a market there for the former third-round pick, one that could develop enough for the Steelers to move him and roll with Mitch Trubisky and Kenny Pickett as the two quarterbacks on the 53-man roster moving forward.

“There is a trade market for Mason Rudolph. It remains to be seen whether or not the Steelers will deal him. There is a good security blanket with a quarterback who’s a veteran with starting experience who’s played well,” Rapoport said to NFL Now host Andrew Siciliano Monday, according to video via NFL.com. “Actually all the quarterbacks from the Steelers have played well this preseason. As Judy [Battista] mentioned, they’ve done a really nice job developing these guys.

“As far as Mason Rudolph goes, there are some teams who still have unsettled backup quarterback situations. My understanding is general manager Omar Khan from the Steelers has received calls. There is some interest,” Rapoport added. “It is unclear whether he would do a deal, but then know that is something that they are discussing and we should have an answer, from my understanding, by Tuesday at 4:00 PM, which way they go.”

Currently, Rudolph is the clear No. 3 in the competition behind Trubisky and Pickett. The five snaps Sunday against the Lions revealed that Rudolph is seemingly running out of time with the black and gold, which would make him an ideal trade candidate for Khan, who could take advantage of a GM out there looking to upgrade the quarterback position ahead of the start of the regular season.

Though Rapoport did not reveal any specific teams showing interest, there’s a good chance Rudolph is dealt prior to the 53-man roster cutdown on Tuesday, freeing up a roster spot and some cap space for the Steelers, who will undoubtedly be looking to add some veterans at key positions ahead of the start of the regular season.

Teams like the New York Giants, Seattle Seahawks, Los Angeles Rams, Carolina Panthers, New England Patriots and Lions all make sense as potential fits for Rudolph, who will be a free agent after the 2022 season.

UPDATE: According to Tom Pelissero, the Steelers have indeed received trade calls on Rudolph, but to this point they’ve been reluctant to deal him, with the quarterback set to earn just $3 million in 2022. He says Pittsburgh isn’t giving him away, even if he’s third on the depth chart behind Mitch Trubisky and Kenny Pickett.

The #Steelers have received trade calls on QB Mason Rudolph, but to this point they’ve been reluctant to deal him, per sources. Rudolph is on the books for just $3 million this season and Pittsburgh isn’t giving him away, even if he's 3rd behind Mitch Trubisky and Kenny Pickett.