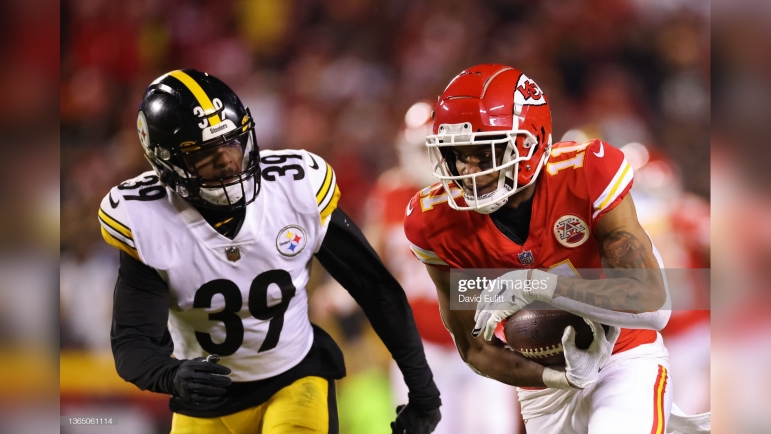 The Baltimore Ravens tried to play wide receiver roulette this offseason, and for the most part, they lost. They traded their top receiver, Marquise Brown, on the first day of the draft—at the player’s request—and prior to that, they waived Miles Boykin, all presuming that they would be able to address the position in the draft.

Well, they never did—they wanted to draft Calvin Austin III, but the Pittsburgh Steelers got to him first—and they never supplemented afterward in veteran free agency, either. At least not until yesterday. They officially signed Demarcus Robinson, who spent his first six seasons with the Kansas City Chiefs.

Robinson signed as a free agent with the Las Vegas Raiders this offseason and was in contention for a starting job, but he was released this past week. Now he is a member of the Ravens and gearing up to catch passes from Lamar Jackson.

And he has a reasonable chance to start, as Baltimore’s receiving corps, at least at the wide receiver position specifically, remains either unremarkable or unproven. They project second-year Rashod Bateman, a first-round selection, to take over that top spot, but the likes of Devin Duvernay, Tylan Wallace, and James Proche were the remainder battling for opportunities.

Of course, the Ravens’ offense relies heavily on the running game, and on the tight end position, both as blockers and receivers. Mark Andrews is an All-Pro tight end who put up better receiving numbers last season than the Steelers’ best wide receiver, Diontae Johnson. They also have an exciting rookie tight end in Isaiah Likely who can add to the passing game.

Robinson has never been a prolific receiver, having spent so much of his time playing behind Tyreek Hill and Sammy Watkins in an offense that included Travis Kelce. In the past five seasons, he has only caught 145 passes for 1,678 yards and 14 touchdowns, averaging out to about 29 receptions for 336 yards and three touchdowns per season.

But he does a lot of different things, including blocking, which fits into the Ravens’ offense. He averages about 700 snaps per season, so it’s not like he’s not getting onto the field. He’s just not been relied upon to be a high-volume target, which is no surprise when you have an offense that already has two very high-volume targets.

Will he make a difference for the Ravens, and play a larger role than he has in the past? Well, I will say this…I don’t think their passing game is any better than it was at the end of last season.