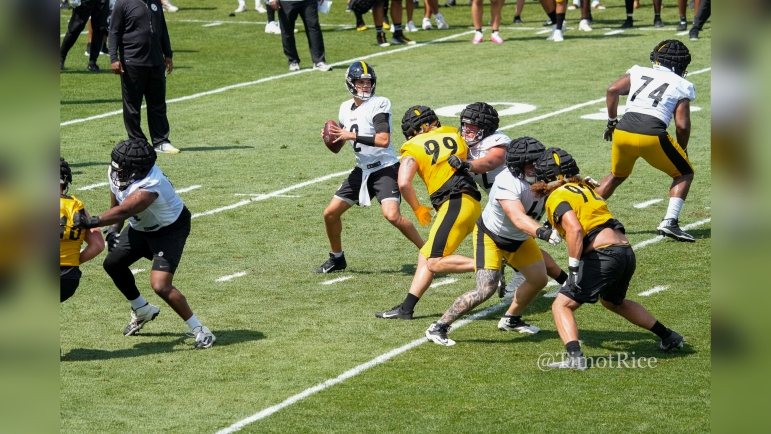 One week into training camp, all anyone can talk about regarding the Pittsburgh Steelers — outside of the fantastic showing by rookie receiver George Pickens — is the three-way quarterback competition between Mitch Trubisky, Mason Rudolph and rookie Kenny Pickett.

Throughout the first three padded practices and the four non-padded practices, all three quarterbacks have had their fair share of reps. Some have stood out more than others, while some have struggled a bit in certain situations. That’s left ESPN Steelers beat reporter Brooke Pryor feeling a bit underwhelmed by the much-ballyhooed competition that was the center of attention throughout the entire offseason for the black and gold.

Appearing on the 93.7 The Fan morning show Thursday with hosts Colin Dunlap, Chris Mack, Dorin Dickerson and Adam Crowley, Pryor talked about just how underwhelming the competition has been, though there’s been one quarterback that’s stood out above the rest through one week of work.

"It's been uninspiring, to say the least… I think body of work as a whole, I've been most impressed with Mason Rudolph… he has looked the most confident, the most accurate…." – @bepryor on #Steelers QB play through first week-plus of training camp.

“I’m so glad I don’t have to make that decision [for the starting QB job] because it’s been a bit uninspiring, to say the least, through the first six or seven practices,” Pryor said on 93.7 The Fan Thursday morning, according to audio via Audacy.com. “Yesterday, I felt like all of them looked a lot better, but that’s also because Cam Heyward and T.J. Watt were taking vet days. It’s a lot easier to be a quarterback without those two guys across from you.

“Body of work as a whole though, I have been most impressed with Mason Rudolph and maybe that’s because my expectations weren’t super high going into it. He was really the overlooked guy,” Pryor added. “To me, he’s looked the most confident, the most accurate. He’s fallen off a bit with the pads coming on and being rotated back to taking some third-string reps. …As a whole, I have been more impressed with Mason Rudolph, a little surprised that Mitch Trubisky has struggled a bit.”

Rudolph, despite him being overlooked in the QB competition and not truly viewed as a threat to win the starting job by many within the media landscape and throughout the fanbase, has responded well to the opportunity in front of him, playing well early in training camp to put himself firmly in the competition under center.

He’s done that while mostly seeing snaps with the second and third string offenses, so he hasn’t really had the chance to show what he’s capable of with the presumed top unit, at least until Wednesday’s practice. That said, he’s done a nice job of pushing the football down the field, showing off his accuracy at all three levels, and really playing with confidence in Year 2 in offensive coordinator Matt Canada’s scheme.

There’s still a long way to go in the QB competition overall in Latrobe at Saint Vincent College, but at least from Pryor’s perspective, Rudolph is leading the way. Will he start Week 1 on the road against the Cincinnati Bengals to open the 2022 season? That remains to be seen. Just don’t count him out yet, or anoint Trubisky overall.